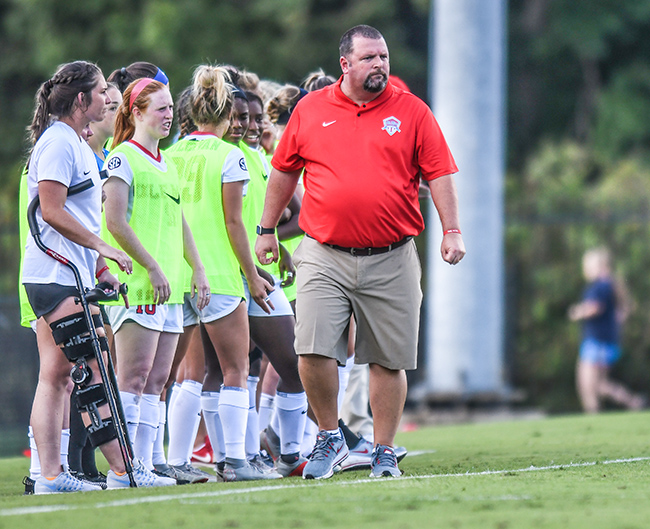 “We are thrilled to have Coach Mott leading our soccer program,” Bjork said. “Since arriving in Oxford in 2010, he has built Ole Miss into a perennial contender not only in the SEC but on the national landscape. In addition to their successes on the field, Coach Mott’s teams have consistently excelled both in the classroom and as role models in our community. Under his guidance, the future is bright for Ole Miss soccer.”

During Mott’s run at the helm of Ole Miss soccer, the Rebels have become a key player on the national scene. Prior to Mott’s arrival, Ole Miss had made four NCAA Tournament appearances in its 15-year history. Under Mott, the Rebels have received a bid to the “Big Dance” in four-of-nine seasons, including three of the past four campaigns. Additionally, the 2016 team became the first in program-history to advance to the Sweet 16.

“I’m incredibly excited to solidify my future here at Ole Miss,” said Mott. “My family and I have made Oxford our home over the last nine years and we’re thrilled to continue to call this great place home. I want to thank Ross Bjork and Deputy Athletics Director Lynnette Johnson for the opportunity to lead the soccer program at one of the elite universities in the nation. While I’m tremendously proud of the successes we’ve had in my time here, I still believe the best is yet to come.”

With Mott leading the charge, the Rebels have developed into a side known for its attacking prowess. Over the past seven seasons, Ole Miss has ranked in the top-four in the SEC in goals-per-game five times, leading the league in both 2013 and 2017. Three of Ole Miss’ top-five goal scorers have played under Mott in CeCe Kizer, Rafaelle Souza and Mandy McCalla, with rising junior Channing Foster poised to climb into the top ranks as well.

Mott’s breakout season came in 2013, when Ole Miss finished the season 16-6-2 overall, including 7-3-1 in league play to capture second in the SEC West. The Rebels’ resumé was good enough for Ole Miss to host an NCAA Tournament match for the first time in school-history, defeating Jackson State 9-0 at the Ole Miss Soccer Stadium.

The Rebels used the momentum to springboard into another milestone season in 2015, winning five of their final six regular season games on the way to victories over Murray State and No. 7 Clemson to reach the program’s first Sweet 16.

Two years later, the Rebels rode an undefeated non-conference schedule to a third bid to the NCAA Tournament in five years in 2017. Ole Miss followed up with a return trip in 2018 after posting four wins over ranked opponents, including a pair of top-10 victories. The Rebels were road warriors in the opening round, toppling No. 25 Clemson on their home pitch before bowing out in the second round to No. 1 Stanford.

During Mott’s tenure, the Rebels have accumulated a 98-71-20 overall record with 21 All-SEC selections and nine NSCAA/USC All-Region Honorees. Additionally, Mott himself was named the NSCAA South Region Coach of the Year in 2013.

The soccer program has also excelled in their scholarly pursuits during Mott’s reign. The team consistently captures the highest team GPA at Ole Miss and has been awarded the United Soccer Coaches Team Academic Award each of the past eight seasons.