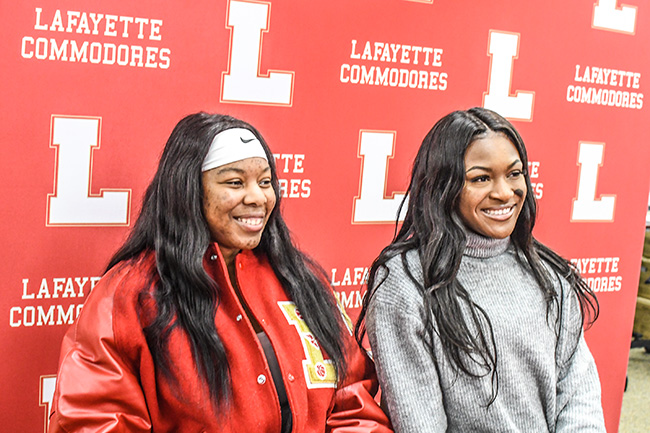 OXFORD – Lafayette held a signing ceremony Wednesday morning for two Lady Commodore basketball seniors. Mariah Holland and Xhiir Burgess will be continuing their basketball journeys together, both enrolling at Itawamba Community College following the conclusion of their senior year.

Burgess said she’s now been decided for a few months, but for Holland it was a more recent decision. Wednesday’s event was merely a ceremony – the girls sent their actual signing papers in to ICC last week.

“It feels good. It feels like we’ve finally finalized everything,” Burgess said.

The Commodore team is 20-2 on the season and undefeated in their district. Mariah Holland is a part of what Linzy has called a three-headed monster for Lafayette. Leading the girls in rebounds, Holland is averaging 9 rebounds to go along with her 9.8 points per game. She scored 24 back in December against South Panola. For Xhiir Burgess, the 2018-2019 season has been a little more difficult.

After averaging 10.7 points and 7.4 rebounds her junior year, Burgess tore her ACL in late October playing volleyball. It was only about three weeks before the first regular season basketball game. Now, Linzy called Burgess an “extra assistant coach.” Despite rehabbing her injury, she attends all the events for the team and is right there on the bench for games.

“It’s a lot harder than you think to just watch. It’s really hard,” Burgess said. “You want to be out there. You want to help them the best that you can, but you can’t. So you just have to use your words, and I try to do that.”

Sitting at 20-2, the Lafayette girls have just five games remaining before the playoffs, starting Friday against division foe West Point. While this iteration of the Lady Commodores may have limited time remaining with each other, Holland and Burgess’ journey together is far from over.