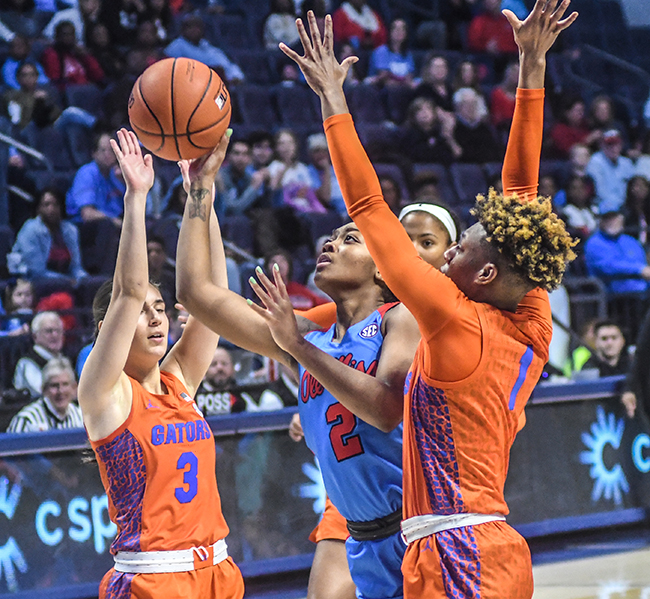 OXFORD – Coach Yolett McPhee-McCuin strolled into the gym head held high last week. Coming off their first conference win, downing No. 16 Kentucky on the road. The word “GRIT” was emboldened in large brick letters on her t-shirt. For a team that’s been bruised and knocked down just as many times as they can remember, that moniker of toughness and determination has stuck and carried the team through the valleys.

“Every year I come up with one word personally for myself. But I thought, ‘maybe we need one for the team,’” said Coach Yo, as she’s oft referred. “I started thinking about toughness and grit. I looked up the word grit and I was like ‘oh my god this is it.’”

The Lady Rebels entered SEC play at 6-8, having lost seven of their last ten games. This wasn’t a surprise to the staff. Coach Yo said on TV following the Kentucky game that this team is a month behind. Due to players leaving following coaching turnover, they had to put the team together on the fly – their last player didn’t arrive in Oxford until September. Experiencing the tough stretches like the one in December was expected, which is why that toughness is all the more valuable.

“I know the type of season we’re getting ready to have and we’ve been having. In order for you to make it through a season like that and be positive, you have to have grit,” Coach Yo said. “You have to be okay with falling and getting back up.”

Now, having won two SEC games in a row and traveling to a Vanderbilt team that is 0-5 in the conference, the message has begun to rub off on the players. The LSU game on Jan. 10 seemed to be an eye opener for the team. Despite losing by 14 at home, Coach Yo said that that loss opened their eyes to what they needed to do to come together as a team.

The LSU game dropped the team to 0-3 in conference play. Despite losing by 14, it was the closest of any game in the conference they played. Coach Yo said that the team began to work more individually after that game without coach prompting, working outside of typical practice hours to develop their individual skills. The message was beginning to rub off on the team.

“It’s not easy to come back after a loss, or two, or three and try to work hard. You might feel down on yourself,” said senior guard Cyrstal Allen. “But that’s what the coaches preach. That’s what our shirts say: grit. We all have grit. And the fact that we have grit before the Kentucky game, and the fact that we had grit the week before in practice, it carried us out to a win.”

Ole Miss hasn’t lost since the that game against Kentucky in Rupp Arena. After beating No. 16 Kentucky by six, the team came home to The Pavilion and beat Florida by ten. Allen described having gotten the monkey off their back in picking up their first SEC win as a “relief.” However, the girls aren’t done here. Ahead of Thursday night’s showdown in Nashville, the girls are back in the gym, working on that grit and toughness.

“Every day in practice we bring energy. We’ve been fighting to get better each and every day. (Coaches) have been challenging us,” Salter said. “I feel like grit has really stuck to us. We understand the meaning and we’re taking advantage of us.”