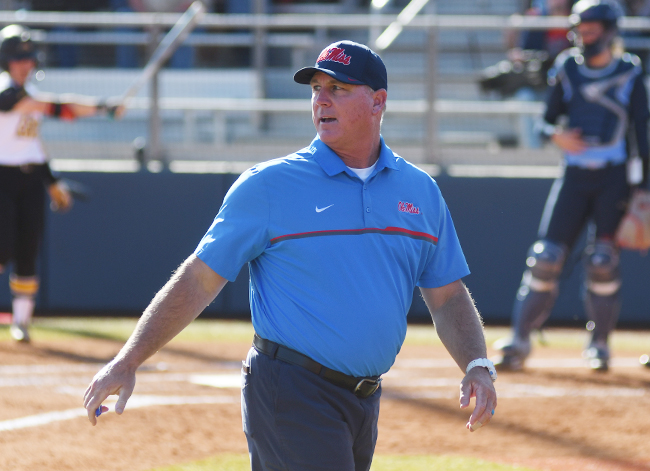 Ole Miss softball opened spring practice earlier this month on Jan. 8. Now, with two weeks before their first game on the road in Orlando, we sat down with head coach Mike Smith to talk about his team, expectations and their underdog mentality.

Q: Now that you have a few weeks of practice under your belt, how do you feel about how the girls are progressing and where they’re at?

A: In 22-years coaching, this is probably the best any of my teams have come back in shape. They’re not really taking any steps backwards after what we did in the fall. For the most part they did a really good job.

Q: What made you want to play so many road games to start the year? *the team is on the road the entire first month of the season*

A: The weather is just so unpredictable here. You could schedule two tournaments in the first two weeks of the season and get them all in and get 10 games. Or you could schedule them and not get any games. When you’re playing in the SEC, you better have some games under your belt before you get into SEC play. I just feel like we needed to go to some of those sunny places where we know we’d have an opportunity to play games.

Q: Do you have any updates on the plans for new facilities?

A: With things that have happened on campus, with revenue and everything else, it’s kind of been put on the back-burner… we do have plans, we do have all those pieces. Whenever Ross (Bjork) feels comfortable with the revenue side of things, we’ll probably put that back on the burner at some point.

Q: Softball doesn’t currently charge for admission. How have you seen that benefit your team and create support?

A: My job is to put quality on the field and hope that it brings people to the game. There’s a lot of excitement about softball. When I talk to people around the community, they always talk about how fun and exciting the game is. They like how fast paced the game is and how close the game is and the interaction our players have with the fans. They really appreciate that piece of it. We try to create that culture here by how we elevate the game by how we play but also what we do in the community and for the community.

Q: You’re ranked preseason No. 12 in the SEC. How do you go about being the underdog?

A: In 2017 when we won 40-plus games and the SEC Tournament, we were preseason eleven or twelve. So I’m fine with it. People don’t expect us to win – that’s a good thing. Last year, because of 2017, I think we were preseason seven. We just have to step up to the challenge. I heard some of the girls talking when we were doing a community service project. Some of them were talking about the rankings, saying ‘Really? Ok.’ It’s nice that they see it – they embrace it really.