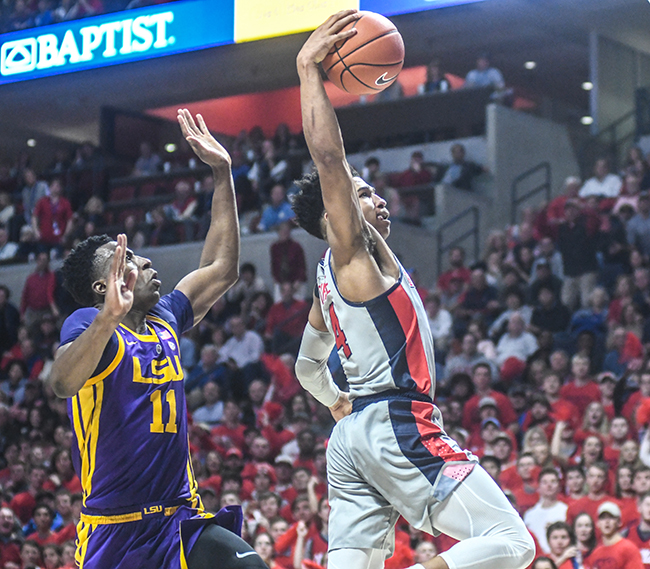 OXFORD – In the heat of conference play, the Ole Miss men are about to get a pause from the string of SEC opponents lined up. Saturday from The Pavilion, the Rebels will take on No. 24 Iowa State as part of the SEC-Big12 Challenge, a competition that historically has not gone in the favor of the Southeastern Conference.

Since its inception and opening year in 2013, the Big12 has won three of the five challenges. The competition tied in the 2016-17 season and went the way of the SEC in the 2017-18 season. With another slate of games about to begin, teams around the SEC are looking forward to showing how the conference has developed into more of a basketball power.

“It’s a prideful thing in the league. You can tell, in league meetings, the SEC-Big12 challenge is something they take very seriously. They want to win,” said Ole Miss head coach Kermit Davis. “It’s a powder blue game, we’ll have those uniforms out for the second time. I think we’ll have a fantastic atmosphere here Saturday.”

As of the latest poll, the Southeastern Conference has six teams ranked in the top-25 to the three schools for the Big12. Unfortunately for the SEC, three of those ranked teams, Auburn, Mississippi State and LSU, will not be competing. Since the SEC has fourteen schools to ten schools in the Big12, four SEC schools sit out of the competition each year on a rotating basis.

Iowa State rolls into Oxford having faced a tough schedule of late. At 14-5 overall, they’ve lost three of their last five games. However, there have been some high points. The Cyclones got ranked No. 24 in the AP Poll this week following a win on the road on January 16 at No. 8 Texas Tech. They’ll be coming to The Pavilion off a loss, having just lost to No. 9 Kansas 80-76 in Allen Fieldhouse.

It’s an Iowa State team that is one of the most efficient in the country, particularly scoring the ball. They average 78.5 points per game and are ranked No. 14 in adjusted offensive efficiencies by Kenpom. The Rebels might be getting an afternoon off from playing an SEC foe, but they’re not getting a cakewalk outing.

“They’ll be as good as any offensive team we play all year long. We couldn’t get back defensively against Alabama, and that’s one of our biggest trademarks,” Davis said. “We’re going to have to be as good as we’ve been all year long in all of our defenses, getting set and making them run half-court offenses.”

Senior shooting guard Marial Shayok leads the Big12 in scoring for the Cyclones, averaging 19.8 points per game. However, it’s the point guard duo that has Kermit Davis’ attention. Sophomore Lindell Wigginton missed ten games earlier in the season with an ankle injury, now coming off the bench behind senior Nick Babb, it’s a potent duo.

“Lindell Wigginton has been hurt, now he’s back to full speed. He might be the best point guard in the Big-12 and he’s starting behind the other point,” Davis said. “So they can play maybe two NBA point guards together with Babb and Wigginton. The floor spacing is unreal.”

Ole Miss will need to do a better job preventing the Iowa State point guard duo from getting out in transition. That starts with preventing turnovers, something they struggled with tremendously against Alabama on Tuesday. Tip from The Pavilion on Saturday is an early one, scheduled for 11 a.m. Central Time. The game will be televised on ESPN.