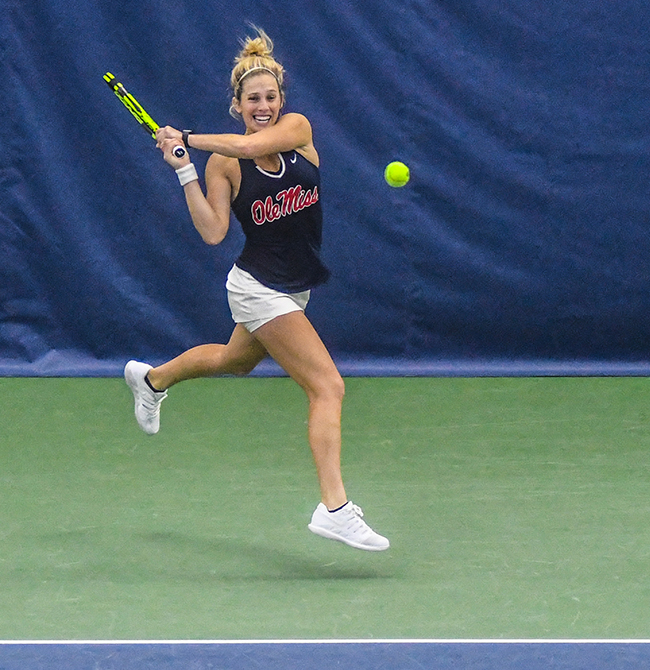 The match concludes the ITA Kick-Off Weekend for the Rebels, who hosted a pair of ranked opponents in the Wolverines and No. 24 Syracuse, as well as Purdue. Purdue and the Orange survived Saturday to advance to the Championship match.

Despite early promising play from the Rebels, Ole Miss was unable to pick up the doubles point, as the pairs of junior duo Tereza Janatova and Anna Vrbenska and fellow veterans Alexa Bortles and Allie Sanford each fell in close series.

Janatova and Vrbenska played cat-and-mouse on Court 2, picking up some speed after winning back-to-back games and take a 5-4 lead. The rally was short-lived, as the Wolverines responded with two straight games of their own, retaking control and eventually the set 7-5.

After being down three games, Bortles and Sanford rallied back to create a 4-4 stalemate before eventually succumbing and allowing Michigan to clinch the doubles point and take an early 1-0 lead.

In singles play, senior Tea Jandric coasted in her opening set at second singles, surrendering just one game to gain the advantage against the 27th-ranked player in the country in the Wolverines’ Brie Minor.

Beside them at fourth singles, Bortles controlled most of the first set, also facing ranked opposition (No. 36 Chiara Lommer).  Bortles picked up the lead with a 6-2 first set, and carried the energy into the second, picking up the first three games before Lommer responded in the same fashion, taking three of her own to present a battle on Court 4.

Michigan added its second point of the match when sophomore Sabina Machalova, ranked No. 68 in the country, fell to Michigan’s Kate Fahey, who carried a No. 3 national ranking into the weekend.

Vrbenska rallied from down 3-0 to even things at 3-3, maintaining the back-and-forth affair to force an extra game in the opening set, but could not compose a rhythm in the second set, falling 6-1 and handing Michigan a 3-0 lead.

On court 5, after dropping her first set, Janatova rallied to win in straight games and force a third set. Jandric and Bortles joined her in third sets, all hoping to keep the Rebels hopes alive.

The match was clinched when Sanford dropped a 6-3, 6-4 decision in the sixth spot, leaving play with Janatova, Jandric, and Bortles all unfinished.

The Rebels will remain at home, welcoming Tulane for a Sunday showdown at Galtney Indoor Tennis Center, slated for a noon start time on February 3.