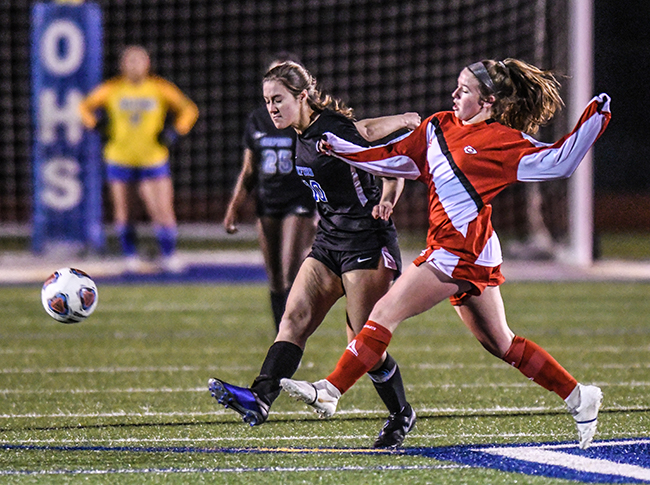 OXFORD – With a steady stream of rain layering umbrellas and soccer balls, Hunter Crane’s Lady Charger team got punched in the mouth early on Tuesday night. After taking a ten-day hiatus before entering the Class 6A playoffs, Oxford came out flat, and Clinton reaped the benefits. In the first four minutes of the game, the Arrows scored. Oxford wouldn’t score in the first half. Crane’s message going into half trailing 1-0: we’ve been here.

“We were down 3-0 against Tupelo. We’ve been in that situation before. It’s not like we’ve never scored two goals in 40 minutes before,” Crane said. “We just needed to continue and play our game and play good soccer.”

The timid, laid back team had a different energy to open the second half. It showed quickly. Less than three minutes into the half, freshman midfielder Grace Freeman placed a great through ball to Morgan O’Connor. O’Connor would end up in a one-on-one with the goalie, and Oxford would tie the game at 1-1.

“The goal there was big. We got that against Tupelo. It was just a sudden spark of energy,” Crane said. “That really turned the corner for our girls. It gave them the confidence that they could do this.”

However, one goal for Oxford didn’t end the game. A ball into the box, fourteen minutes into the half caught a Charger defender out of position. She would surrender the penalty kick with a foul, one that Clinton would net easily. 2-1 Arrows. Less than one minute later, it was an Oxford attacker being taken down in the box. O’Connor took the penalty kick for the Chargers. 2-2 Tie. The goals came 20-seconds apart.

Neither team were able to gain a decisive edge over the final 26 minutes of regulation, and the game would go to overtime tied 2-2. Morgan O’Connor would need to be assisted off the field with around five minutes to play in regulation with left hamstring cramps. Also, in the final five minutes, Oxford goalie Mary Anna Fulton and a Clinton striker would collide, causing both to leave the match. Both O’Connor and Fulton would return for overtime.

The first goal of the extra period would go down a lot like the final two of regulation. Oxford’s Carissa Strum would find the back of the net in another penalty kick, putting the Chargers up 3-2 just three minutes into overtime. The Chargers would ice the game behind a outside-the-box laser from senior midfielder Emily Hayward to end the first overtime period. No more goals were scored. Final: 4-2 Oxford.

“We just continued to press and play our game. It felt like the last couple minutes of the second half and into overtime we finally knocked that rust officially off and played a lot of soccer that we expected to play,” Crane said.

The Lady Chargers will play Northwest Rankin, in the second round of the 6A playoff, on the road Saturday.

Oxford boys fall 2-1 on the road to Clinton

While it was a joyous evening for the ladies, things didn’t end as well for the Oxford boys. Traveling to Clinton for their playoff opener, the boys lost 2-1 to the Arrows. Clinton led 2-0 in the game before a late goal by Thomas Mayo brought the game within a goal. However, the boys were never able to complete the comeback. Oxford had previously beaten Clinton 5-0 back on Nov. 17 in Oxford.