Lady Commodores blank Ridgeland to advance in 5A playoffs 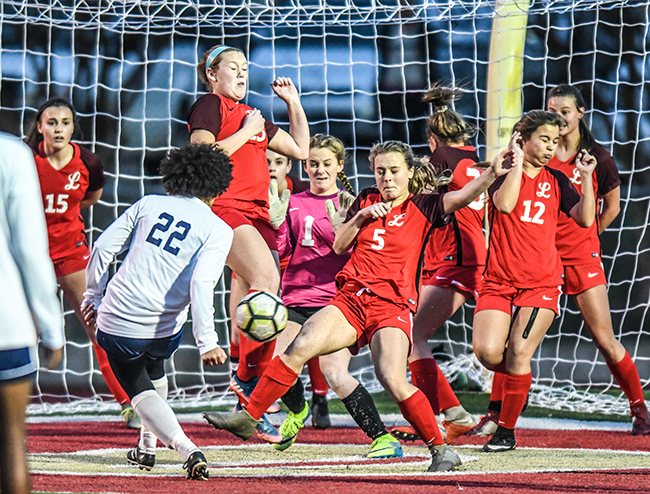 Lafayette’s girls soccer team is in the midst of one their most dominant seasons in program history. They kept it, and their goal of another state championship, alive with a 3-0 win over Ridgeland in the first round of the MHSAA Class 5A state playoffs at William L. Buford Stadium on Monday.

The Lady Commodores (21-2) will go to Center Hill on Saturday for a quarterfinal match up.

The match got off to an odd start with two unique fouls in each team’s goal box. Instead of getting a penalty kick, Lafayette was given an indirect kick inside Ridgeland’s box and capitalized when Hudson Lindsay found the back of the net for the early 1-0 lead in the 15th minute.

Ridgeland had the same opportunity minutes later in the Lady Commodores’ box but Lafayette lined up on the goal line and defended the kick to keep it a one-goal lead at the time.

Shortly after that Ridgeland went down a player after earning a red card, giving Lafayette a player advantage the rest of the match.

“It’s different when weird calls are happening because there’s not very many games where kids are getting red-carded,” Lafayette head coach Melinda Scruggs said. “I was glad we were able to stay composed and putting away chances are key because it gives us more confidence.”

Lafayette doubled their lead right before halftime when Lucy Wilson scored her lone goal of the night.

A 2-0 lead in a soccer match is one of the scariest leads to have but Katt Moss gave the Lady Commodores some insurance with the final goal of the night nine minutes into the second half. From there Lafayette dictated the pace of the second half and kept Ridgeland off the scoreboard to advance to the next round.

“Give (Ridgeland) a ton of credit because they played down a man and for them to still, in my opinion, make us nervous was really good,” Scruggs said. “They kept after it and was very physical. Putting away a third goal did help us in terms of our mindset.”

Earlier in the season Lafayette met Center Hill during the Oxford Invitational at FNC Park on Nov. 10. The Lady Commodores got the better of the Lady Mustangs with a 4-2 victory but an entire season has taken place since that match and Saturday’s second round affair.

“We’ve come a long way and so (has Center Hill),” Scruggs said. “It’s going to be a good match up and we’re going to have to be ready to play on Saturday.”

A time has not been set for the match.

One Lafayette soccer team’s season continued on Monday but another ended as the Lafayette boys fell on the road to Germantown by a final score of 3-0. The match stayed tight with the Mavericks holding onto a slim 1-0 lead most of the match before they added a couple goals late for the cushion.