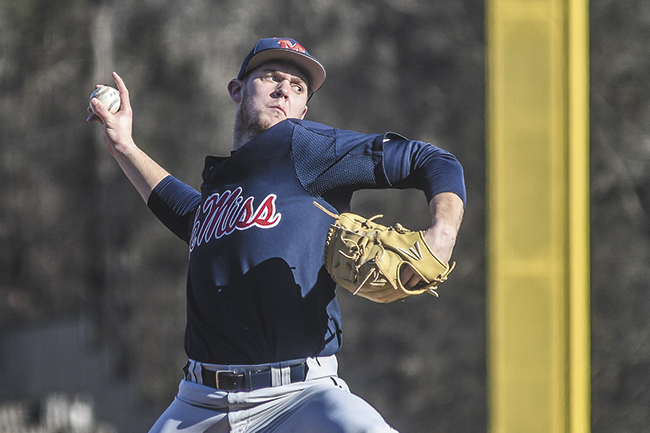 OXFORD – Ole Miss opened baseball scrimmages this past weekend, taking place in three intra-squad games over the course of the weekend. Stats and outcomes for these games are hardly of importance.

Instead, the games are for players to get used to live hitting and pitching scenarios, as well as for the coaching staff to evaluate which players they expect to be day-to-day contributors.

“You try to figure out who your best nine are, and right now that’s really hard. I’ve been part of three national championships, and I don’t remember a year where we said ‘we just have too many players – we’re just too good,’” said head coach Mike Bianco. “I don’t think we should worry about who’s going start in right field or who’s going to start at third base. I just think we should continue to get better as a team. I know that sounds like coach speak, but it’s true.”

It was a big opening weekend for senior Chase Cockrell. Coming off a 2018 season where he hit .317 with nine home runs, primarily from the designated hitter position, Cockrell went 5 for 9 and hit the only two home runs on the weekend for the Rebels. One of the homers traveled an estimated 415-feet and was the hardest hit ball at Swayze field since the start of the 2018 season.

For the pitchers, this month is primarily about throwing strikes and getting their arms used to the grind of SEC baseball. Starters threw about two innings a piece. Bianco expects that to grow to three innings this upcoming weekend and four the week after.

“By the time we open up on Feb. 15, you hope the three guys who start Friday, Saturday and Sunday can get to 80-plus pitches. You want 80 to 100 pitches. That way you don’t have to start someone who you don’t think can get through five innings,” Bianco said.

Steps being made to limit the spread of Chronic…