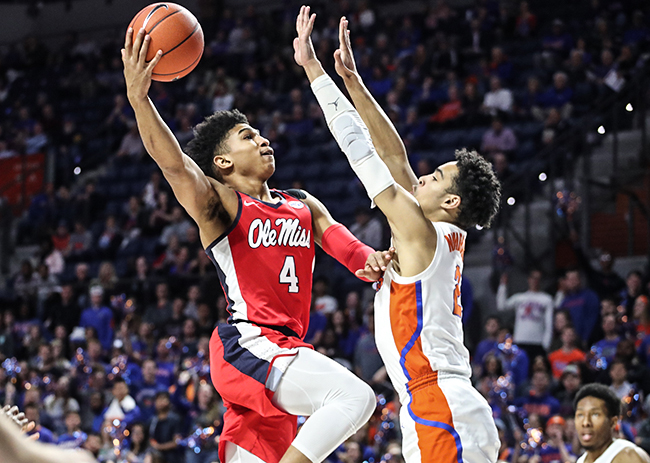 In a game that was as evenly fought as any Ole Miss has played all season, the Rebels were unable to close out Florida down the stretch. After Florida would send the game to overtime with a game-tying three with 2.5 seconds remaining in regulation, the Gators would win 90-86.

Florida plays one of the slowest games in college basketball, ranking No. 311 in the nation in possessions per game. They do this because they’re far from the best scoring team in the country. In fact, they rank dead last in the SEC in points per game at just 61.5.

In the first half, Florida was able to hold Ole Miss just to their stylistic likings. The game was slow and low-scoring through 20 minutes. Ole Miss went to half trailing 33-30 and had shot just 37-percent from the field and one for eight from three. For a big portion of the half they looked to be the better team, but the shots simply weren’t falling. Terence Davis’ eight made free throws really kept the Rebels hanging around through the first half.

Ole Miss would open the second half well, tying the game at 38. Florida then went on a 7-0 run. The Rebels weren’t done. Ole Miss followed up the Gator run with one of their own, scoring 12 of the next 16 points, capitalized by a Breein Tyree dunk in traffic. The dunk would give Ole Miss their first lead since it was 28-27. The run would end at 17-5, giving Ole Miss a 55-50 lead with about eleven minutes to play.

The final eleven minutes of play were as back and forth as they could possibly have been. A big part of the game down the stretch came down to free throws. Ole Miss made all ten of their second half free throws, where Florida freshman Keyontae Johnson went a crucial 0-3 from the free throw line down the stretch. It didn’t matter.

After missing a layup leading to an Ole Miss offensive rebound, Breein Tyree went to the line with 8.8 seconds left and Ole Miss up one. Tyree would sink both. It wasn’t over. Florida senior KeVaughn Allen drained a three pointer over K.J. Buffen with 2.5 seconds left to tie the game at 76. The game would go to overtime.

It was simply Florida’s overtime. Following up off the game-tying three, they opened overtime on a 10-3 run. Ole Miss was able to cut the lead to three points with 1:37 in the overtime period and two points with 11 seconds to play but were never able to completely cut into the early hole. They would lose the game 86-90.

True freshman K.J. Buffen had his most aggressive game of the year on the offensive end. Entering the night, Buffen was averaging 19.9 minutes per game for the Rebels but scoring just 5.9 points. Against Florida, he played 29 minutes and scored a career high 17 points.

The loss comes as a tough one at a much-needed point for the Rebels. According to ESPN bracket expert Joe Lunardi, the Rebels were projected as a No. 9 seed in the NCAA tournament coming into the game, while the Gators were one of the first four teams out. Close games like this, coming on the road in the conference, are games Ole Miss needs to be able to pocket. Kermit Davis’ team return home after this one, playing rival Mississippi State on Saturday at The Pavilion at 2:30 p.m.