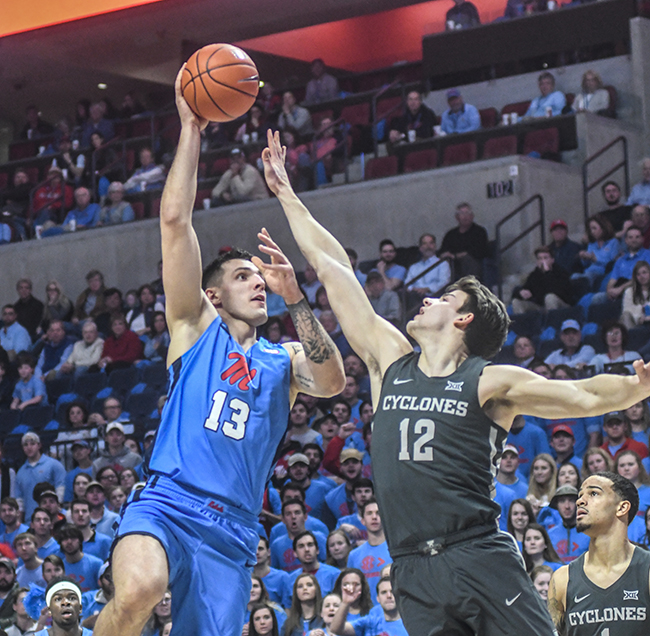 “Bruce just couldn’t get back defensively. We couldn’t get him to run back. He just wouldn’t run. I didn’t know what to do,” said head coach Kermit Davis. “I just took him out. Then I ran out of timeouts. I didn’t want to use my third timeout in the first half, but I thought if I left him in (their lead) might go up to 15.

It’s pretty simple. Ole Miss needs more from their big guys. They play Stevens and Dominik Olejniczak interchangeably, but almost never does OIe Miss play them at the same time. Combined on the year, they play almost a full game’s worth of minutes at 38.1 of the 40 minutes per game.

However, the big guys combine to average just 8.1 rebounds a game. That’s not cutting it. The Rebels get good rebounding from their guards (Terence Davis averages 5.9 per game), but there are five individual players in the SEC alone that average the same amount of rebounds per game or more than Stevens and Olejniczak do combined.

“If we don’t get much from Dom and Bruce… most of the year we’ve gotten one of them to play. Against Arkansas we had both of them play (well),” Davis said. “In the last two games, we really didn’t get any production (from them). If we start trying to play K.J. Buffen, in these games, at the five, it gets really hard for us.”

Wednesday, the Rebels travel to Florida to take on the Gators. It’s a chance for the Ole Miss big guys to right the ship, against a team that, like Ole Miss, lacks individual great rebounders. Florida is last in the SEC in rebounds per game, but it’s worth noting that this is partially because they play slowly. The leading individual for the Gators averages just 6.2 rebounds per game. Stevens and Olejniczak need to take advantage.

At first glance, one may think the Rebels are simply a better basketball team than Florida. Right now, that’s just not true. It should be a very evenly matched game. Yes, Florida is just 11-8 on the year to Ole Miss’ 14-5, but the advanced statistics tell a different story.

Kenpom, a college basketball efficiency metric, ranks Florida No. 27 nationally, with the eighth-best defense in the nation. Ole Miss comes in at No. 39 according to Kenpom. NCAA NET rankings, a new statistic developed by the NCAA to hopefully replace BPI, ranks Ole Miss No. 36 and Florida No. 38.

One thing we know for sure about Wednesday night is that it will be a game of contrasting styles. Florida wants to slow the pace and win with defense. Ole Miss needs to score points to win. Florida allows just 61.5 points per game, good for tenth nationally, while Ole Miss is averaging 77.7 points per game on offense.

Florida needs that defense, because it’s far from the best team offensively in the conference. Only two Gators average in double digits, led by senior KeVaughn Allen and his 12.7 points per game. The game is slated for 5:30 p.m. Central Time on Wednesday night from Gainesville.

Lady Chargers need overtime to down Clinton 4-2 in…