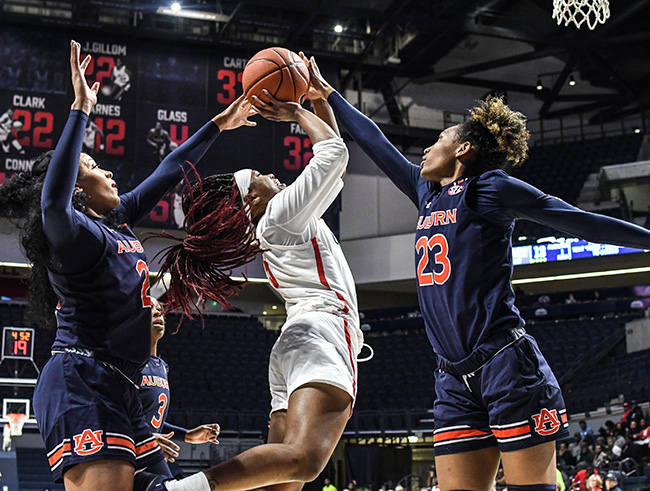 OXFORD – A disastrous start to the second half proved too much for coach Yolette McPhee-McCuin’s Rebels to overcome. Ole Miss was outscored in the third quarter by 15, falling to Auburn 64-51. The loss drops Ole Miss to 8-14 overall and 2-6 in SEC play.

Auburn pressed full court on defense from the start of this one. Ole Miss didn’t handle it well to start, falling down 11-2 to start the game. The Rebels, adjusted, battling the press to outscore Auburn 11-4 over the final 6 minutes of the first quarter. Yet again, Auburn took control to start the second. However, Ole Miss was able to overcome their second quarter woes, battling back from 25-18 deficit to go into halftime down just 27-24.

The second quarter woes simply manifested themselves in the third. Over the first eight minutes of the quarter, the team committed nine turnovers, allowing a three-point lead to balloon quickly to 18. It was simply an insurmountable quarter of basketball. The fourth quarter was actually won by Ole Miss, however the Rebels would go on to lose 64-51.

“Disappointing third-quarter effort for the entire team. I expected Auburn to make a run. I was disappointed not because they made the run, but I was disappointed in our reaction to it,” McPhee-McCuin said. “In order to play well against a team like Auburn, we’re going to need to withstand the pressure for 40 minutes. And we just didn’t tonight.”

It was far from the best day for Ole Miss senior Crystal Allen. Allen, who is second in the Southeastern Conference in points per game at 18.2 points, scored 16 points. But it was her 3-13 shooting and 8 turnovers that hurt. She was also scoreless in the first half. This Rebel team isn’t going to win many games, if any, with Allen playing that poorly.

After starting the year 14-2, Auburn came into this one having dropped three of their last four games, with the only win coming by two to winless-in-the-SEC Vanderbilt. It was a team in desperate need of win, and Ole Miss was an easy target. The Rebels have a short layoff, playing another home game Sunday at 2 p.m. against a No. 20 Texas A&M team riding a six-game win streak.