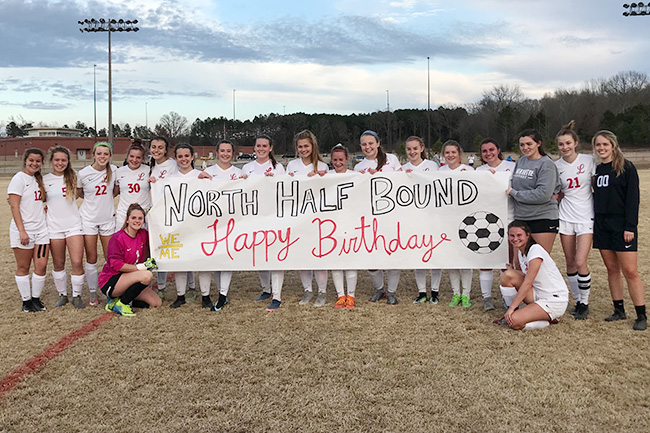 Lafayette High players hold a sign wishing happy birthday to coach Melinda Scruggs after defeating Center Hill 5-0 in the MHSAA Class 5A playoffs on Saturday, February 2, 2019. Lafayette hosts Lewisburg on Tuesday with the winner advancing to the state championship.

Facing a physically bigger team on the road, the Lafayette High girls never lost control of the quarterfinal game.

Senior Katt Moss put the game on ice with a tap in to go up 4-0, sending Lafayette back home for a semifinal showdown against Lewisburg.

The shutout doesn’t do the final scores justice, as it could’ve almost been double that.

The best offensive chance for Center Hill came about 12 minutes into the first half. Mallory Gaines had a fast break, and gotten past Lafayette’s backs.

Commodore goalie Caitlyn Rhea made a risky move by coming out of the box to snag Gaines’ dribble. Had Rhea missed there, Gaines most likely would’ve tied the game at one.

It seemed like Lafayette controlled the entire first half. The ‘Dores consistently had the ball on offense for the first 40 minutes, whereas Center Hill only had the ball for about five of those 40.

“We’re a possession oriented team,” coach Melinda Scruggs said. “It took us a little time to settle in.”

Scruggs said her team’s offensive approach hasn’t changed throughout the season, even as they’ve progressed through the playoffs.

Lafayette went up 1-0 with about halfway through the first half on a tap in by Lucy Wilson. Hudson Lindsay fed Wilson, putting the ‘Dores in front.

The Commodores seized full control of the first half in the 31st minute with a strike by Lindsay. Lafayette would end the first half up 2-0, with seven corner kicks.

Lindsay was arguably Lafayette’s biggest offensive catalyst, as her first-half goal and assist put the ‘Dores in front, easing the nerves of some nervous Lafayette fans.

“She’s really stepped up this year and controlled the center of our field,” Scruggs said of Lindsay. “She’s definitely one of our go-to’s.”

Lafayette would finish the game with nine corner kicks, which played into Lafayette’s offensive plan of getting the ball in the box off set pieces and crosses.

“We do a good job going over those,” Scruggs said.

Lafayette scored less than a minute into the second half on a strike by Julia Perkins. Perkins also played stellar defense against the Mustangs.

Those scores, along with another ball that hit the crossbar and bounced out, would’ve put Lafayette up 8-0.

“She was very good and gave us a ton of issues in the box,” Scruggs said.

Sara Grace would add one more goal with about five and half minutes left in the contest.

Lewisburg won its quarterfinal match 3-1, setting up a showdown on Tuesday at Lafayette.

While huddled with her team celebrating the win over Central Hill, Scruggs relayed a simple message to her team: “We’re not done.”