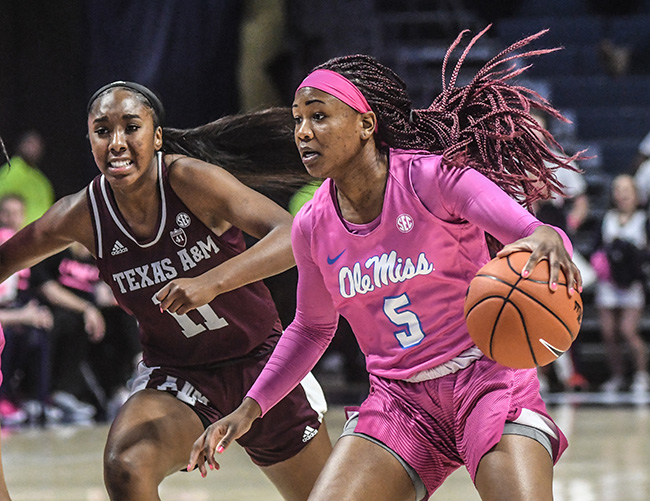 OXFORD – For their second straight game from The Pavilion, the Ole Miss women struggled with turnovers in the third quarter, plaguing them in a 72-60 loss to No. 20 Texas A&M. The loss marks four in a row for the Rebels and drops them to 2-7 in the Southeastern Conference.

“I thought it was a valiant effort for my group. Sometimes in coaching, they kind of drive me nuts, because if we had this fight last game we may have been able to split this weekend,” said head coach Yolette McPhee-McCuin. “Still a lot of growing pains.”

The first quarter was one of the best the girls have played in quite some time. They forced a ridiculous eight turnovers, shooting 3 of 5 from three and assisting on all of their buckets to jump on top of No. 20 Texas A&M 17-14. A Rebel team that has struggled in the second quarter tremendously this year, they have now played good second quarters in back-to-back games. Free throws kept the Aggies around in the second quarter. Ole Miss would lead 37-34 at the half, but a half in which Texas A&M had made 12 of 13 free throw attempts.

Erie shades of familiarity plagued the Rebels third quarter. In Thursday’s loss to Auburn, Ole Miss committed nine turnovers in the opening eight minutes of the second half. Tonight, they would turn the ball over nine times in the quarter. Like the Auburn game, the one quarter took Ole Miss from a game they were winning by three points to a game in which they were trailing nine, all over the course of ten minutes. Things would get a little better in the fourth, but Ole Miss would still lose by twelve.

“Ole Miss never gave up, they stayed in it the whole time,” said Texas A&M head coach Gary Blair. “When you got a chance to put the hammer down, you better do it, or this team will get up just like Ole Miss kicked Kentucky on the road.”

Texas A&M was paced in this one by the SEC’s leading scorer Chennedy Carter. Carter scored 28 points, seven came from the free-throw line. As a team, the Aggies were 23-27 on free throws. Ole Miss has only three home games remaining on the year with the next one not until Valentine’s Day. They’ll take the court again Thursday at No. 16 South Carolina.