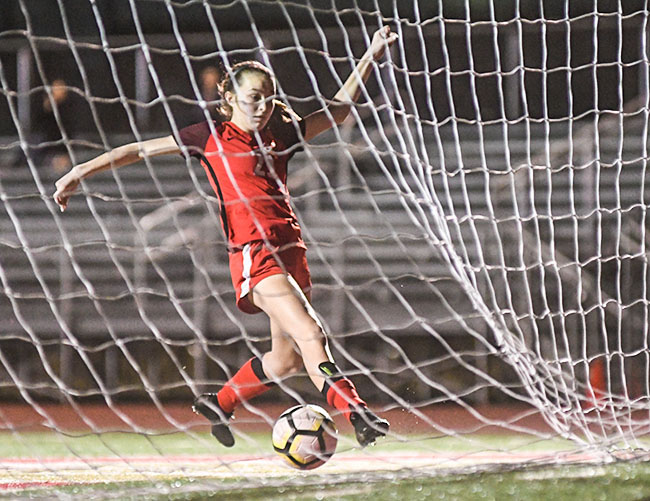 OXFORD – It only took one. After 61 minutes of scoreless soccer, Lafayette finally got on the board. It was the only goal needed in the Mississippi North Half final, as the Lady Commodores defeated Lewisburg 1-0 to advance to the Class 5A state championship.

“Hands down they’re a fantastic team. And we knew that,” said Lafayette head coach Melinda Scruggs. “They’re a very talented team with super fast kids… we had to keep going as hard as we could to make sure we didn’t let them in.”

It wasn’t a first half that lacked opportunity for the Lady Commodores. It just lacked goals. Lucy Wilson had a good chance on a through ball from Julia Perkins with 10 minutes to play in the half but was unable to get a shot off as a Lewisburg defender caught up and knocked the ball away. Lafayette also had a good chance off a corner kick with about six minutes to play and another good shot from Wilson with five minutes to play. None would find net. The game would go to half scoreless, tied 0-0.

“We did have some nerves in the beginning of the game today. I think we got kind of amped up and it did show,” Scruggs said. “In the first half we just didn’t put away a couple of chances we had, but we just knew it would come at some point.”

Similar to a play in the first half that yielded nothing, Lafayette got on the board on a Lucy Wilson breakaway goal that she pushed past the goaltender on second effort. Twenty-two minutes into the second half, we had our first goal. 1-0 Lafayette.

“Getting (redemption for the first goal) was so nice,” Wilson said. “I scored and my whole body just calmed down. It was awesome.”

Lafayette and Lewisburg faced off as recently as Jan. 24 with the Lady Commodores winning 4-0. With Lewisburg already secured a top playoff spot, it was unsure if Lewisburg had even played their top lineup in that game. Tuesday night was different, a much more competitive, back-and-forth game that wasn’t decided until late.

“At this point, anyone from here on out is going to be good. We just have to be ready to play,” Scruggs said.