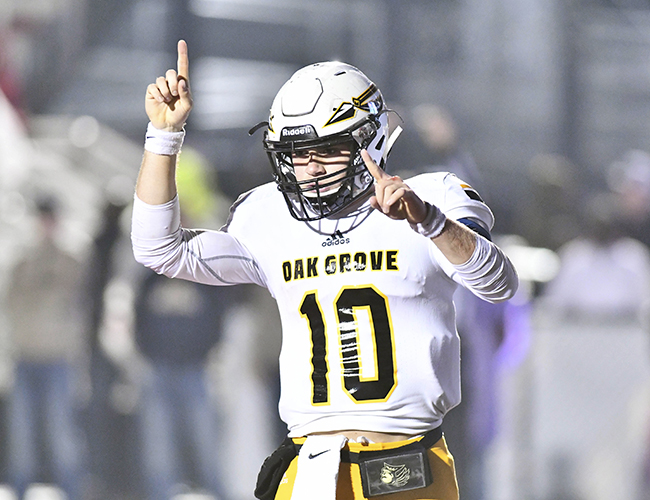 Less than 48-hours before the reopening of the signing window on Wednesday morning, Ole Miss landed a commitment from two of its most sought-after prospects. John Rhys Plumlee, a four-star quarterback from Oak Grove High School in Hattiesburg, and Derek Diamond, a highly recruited pitcher and third baseman both committed to play for the Rebels Monday night on Twitter.

“God’s plan unfolds in His time, not ours. For this I am grateful. God has given me opportunity of relationship with so many outstanding coaches and staff from outstanding programs throughout my recruitment,” Plumlee said in a statement Twitter. “I trust him. After much prayer and consideration, I fell God is calling me to serve in Oxford, MS. I am so grateful to announce that I will be signing my (National Letter of Intent) with Ole Miss on Wednesday, Feb. 6.”

Holding offers from a number of top programs, Plumlee committed to play football for the Georgia Bulldogs over this past summer. However, he would re-open his recruitment in December, taking official visits to Mississippi State, Auburn and Florida State, in addition to Ole Miss. Come Wednesday, he will official become a Rebel.

“I think one of the main things was it was kind of where I fit in Rich Rod’s offense. It was also were my heart was at. It was at Ole Miss. It’s in-state, it’s close. I wouldn’t say distance was just a huge factor for me, but once I took my official visit, it was where my heart was at,” Plumlee told the Ole Miss Spirit.

Interestingly, a critical part in Plumlee’s recruitment has nothing to do with the gridiron. Plumlee is also a highly recruited center fielder on the diamond. As high school junior, Plumlee hit .455 in 28 games for Oak Grove. He will likely play both baseball and football for Ole Miss. However, he’s not the only player to commit to Mike Bianco’s baseball squad Monday night.

In addition to the commitment of the two-sport Plumlee, Bianco’s Rebels earned a commitment from a high-schooler with a name perfectly suited for the diamond, Derek Diamond. Diamond was one of the top unsigned pitchers in the 2019 class and the No. 2 player in the state of California. From the San Diego area, Diamond was an Under Armour and Perfect Game All-American in 2018.

The official signing window opens back up Wednesday morning, following the early window back in mid-December. Ole Miss football landed 25 players in the early signing window, with 11 of them having already enrolled in school.

Lafayette is facing a different Lewisburg team in 5A…