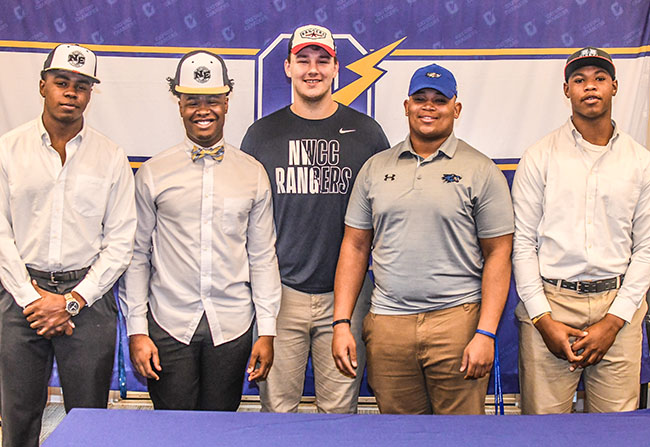 OXFORD – Five Oxford football seniors secured their futures on Wednesday, signing with a handful of Mississippi junior colleges to continue their athletic career.

Lamarcus ‘Red’ Faulkner, Ryan Lipscomb, KT Owens, Dede Pegues and Travien Sims were one of the smallest senior classes in recent memory for Oxford football. Head coach Chris Cutcliffe said it was one of the tightest knit groups he’s ever coached. The senior class went 25-12 under Cutcliffe, making two playoff appearances including the first Class 6A playoff appearance in school history.

“With such a small group, the leadership that this class of 2019 showed was pretty incredible. It could have easily been used as an excuse to have less seniors than we’re used to having, but that’s not at all how these guys looked at it,” Cutcliffe said. “I think they bonded together very closely and really set an outstanding example as leaders in our football program. I’m very proud of them and very thankful.”

Faulkner signed with Copiah Lincoln Community College. A team captain in 2018, he recorded 80 tackles and 7 sacks in his time as a Charger.  He’ll remember how a handful of unfortunate circumstances help the team together.

“What I’ll probably remember the most is how hard these guys worked,” Faulkner said. “We had a couple of people go down with injuries, but as a unit we stuck together. We still went 9-3. With a lot of seniors being hurt, they pulled it out.”

Center Ryan Lipscomb signed Wednesday with Northwest Community College. As a senior, Lipscomb was selected to play in the Mississippi Alabama All-Star Game, but he was unable to play as an ACL injury forced him to miss back-half of season and the all-star game.

“When you’ve been though what I’ve been through, it feels good to finally put pen to paper and make a good decision,” Lipscomb said.

After playing just one season of varsity football, KT Owens signed with Mississippi Delta Community College. For playing just one year, his 52 tackles – 13 for loss – and three sacks was very impressive. He was named to the 2018 All-Region 2nd team defense.

The final two of the five will be staying together. Dede Pegues and Travien Simms will be continuing their football career together, both signing today with Northeast Community College. As a senior, Pegues was named to the 2018 All-Region 1st team offense. Simms was named 2018 All-Region 2nd team behind his 80 tackles.