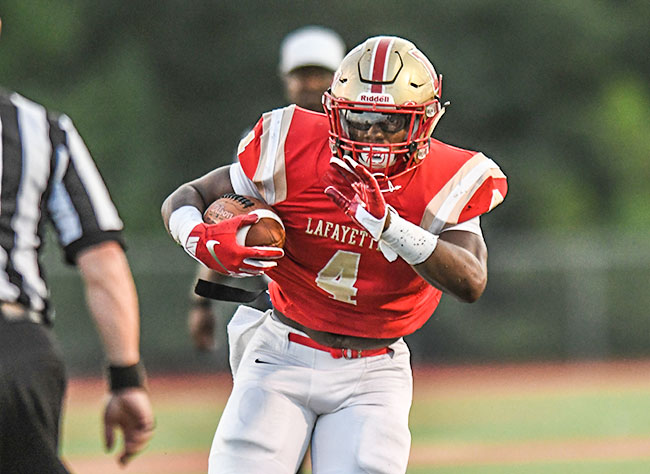 The second half of National Signing Day took place on Wednesday and Lafayette saw five seniors ink with some of the top junior colleges in Mississippi. With the early signing period, which takes place in December it provides schools the opportunity to celebrate their players’ success twice in one year. It also allows players time to think on their life-changing decision.

“It’s really cool, I think, in our state because we’re so blessed to have our junior college system,” Lafayette head coach Michael Fair said. “All five of these guys have a chance to sign, again, from their respective schools for bigger programs. They did a lot (for our program). To look where we were last year with the injuries and all the things that happened, it’s not easy to turn something like that around. When I think back on this group it won’t be because of their athletic abilities. It will be their leadership qualities and high character.”

Two former Commodores will be playing close to home. Dabney and Shaw signed with Northwest Mississippi Community College and will remain teammates in Senatobia for the next two years.

Dabney’s career at Lafayette saw him play multiple roles on the field. He served as their primary punter but also saw time as a receiver and eventually the Commodores’ starting tight end. In his senior year Dabney had 13 catches for 67 yards and a touchdown. In 13 games he had 33 punts that averaged 41 yards an attempt and 15 of them landed inside the 20-yard line.

“When (Dabney) was young we had him at receiver He had tremendous hands,” Fair said. “Then he kept growing and he kept growing. We just had a talk with him a year and a half ago and said ‘look man, we’re going to have to put your hand down.’ He’s always been a great punter and I’m sure they’ll utilize that at Northwest but he was a really dominant force for us up front at tight end.”

The running backs room at Lafayette has always been one their most talented on the team. This year was no different with Shaw and Stewart making life difficult on opposing defenses. Shaw was always part of a running back by committee and spent time on defense last season out of necessity due to injuries. Shaw rushed for 1,266 yards and 14 touchdowns on 189 carries his senior year.

After sitting out his junior year due to transferring from Oxford, Stewart provided a boost to the Commodore backfield his final high school season. The Pearl River Community College signee had 1,231 rushing yards and 13 touchdowns on 121 carries this season.

“He was behind a great one in Jamarcus (Russell) for a couple years and then he kind of waits for his turn and then we have Lance who emerges,” Fair said. “What they were able to do as a tandem, I don’t know if it’s ever going to be done here again. They were just really dynamic and they were just so different. It was never an issue of who gets the ball or who’s turn it is. It just all worked out like it was supposed to.”

Lafayette’s defense was one of their strong suits this season and two big reasons for it were James and Twilley. James, who signed with Holmes Community College on Wednesday, finished this season with 88 tackles and was second on the team with four interceptions. Twilley inked with Itawamba Community College and finished just behind James and Jefferies with 76 tackles and had two picks. He also defended eight passes and had one fumble recovery.

“(James and Twilley) were so instrumental, especially on the defensive side of the ball,” Fair said. “Quentin is just a really good, physical cover guy. He’s very diverse and I think that’s what a lot of these junior colleges saw in him. Quinshun is lightning in a bottle and quick as a cat. He could have been the best slot receiver I’ve been around in quite some time but we needed him on defense. He needed to be that quarterback in that defensive backfield.”