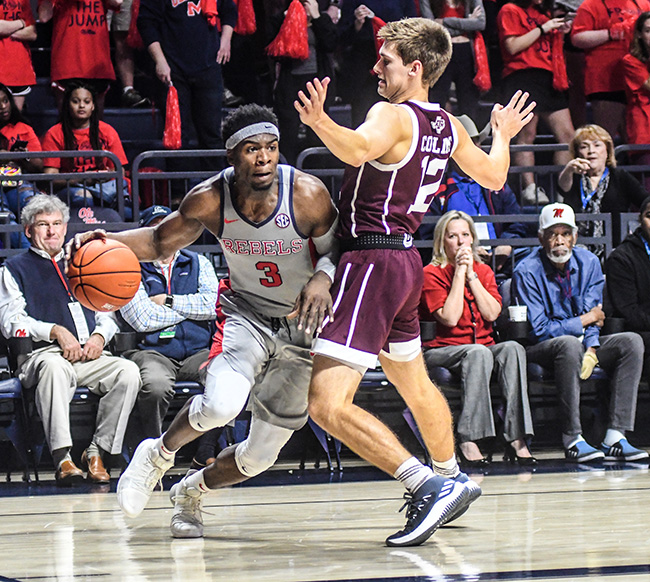 OXFORD – Ole Miss needed a rebound game. Literally, they needed to rebound, and they needed to win a game. Wednesday at home against Texas A&M, they at least did one of the two. Ending their four-game skid, Ole Miss defeated the Aggies 75-71 to move back above .500 in SEC play.

“We were in desperate need of a win, and we found a way,” said head coach Kermit Davis. “It wasn’t pretty, but we got our guys competing.”

Kermit Davis’ Rebel squad came out of the gates hot. Ole Miss hit on eight of their first nine shots to take a 19-6 lead. However, later in the half it was A&M making their own run, a 14-2 run to cut the Rebel lead to one point with a little over three minutes to play in the half. A sequence of a three-pointer on one end and a drawn charge on the other from Blake Hinson ended the Aggie run. After twenty minutes, Ole Miss led just 37-36.

Texas A&M was hot to start the second half. At eight minutes into the half, they were shooting 78-percent and had connected on all five three-point attempts. The Aggie lead ballooned to as much as 57-48 before a D.C. Davis three ended the Rebel drought. Ole Miss would fight back. After numerous similar deficits, one sequence of back-to-back Terence Davis steals on the defensive end led to five Breein Tyree points, giving the Rebels their first lead since very early in the second half at 63-62 with under five minutes to play.

Where Texas A&M went on a 14-2 run late in the first half, it was nearly the opposite to end the game. They hit on just one of their final nine shots over the final 3:31 of play. Ole Miss would win 75-71.

“The second half we held them to 39-percent and it was probably much lower than that the final ten minutes,” Kermit Davis said. “I just thought it as more toughness and contesting shots.”

This past Saturday against Mississippi State, the two Rebel big men (Dominik Olejniczak and Bruce Stevens) played 40 combined minutes and had zero defensive rebounds. Wednesday night they were better, but not good. The two would combine for seven rebounds in the win over the Aggies. The team as a whole was outrebounded 38-33.

“We still got outrebounded, but it was better down the stretch,” Kermit Davis said. “I thought we found a way… we’re still a work in progress there.”

Ole Miss struggled throughout this game at defending the perimeter. The Aggies shot 11 for 23 from beyond the three-point arc and shot 45-percent on the night. Ole Miss countered the Aggies’ hot shooting by getting to the line. The Rebels shot 18 second-half free throws, making 17 of them.

It was a critical win for Ole Miss at a critical time. After dropping the last four, they simply could not afford to lose to this Aggie team. Texas A&M ranked 129 nationally by Kenpom and 104 by the NET entering the night. The Rebels are now 15-7 and 5-4 in the SEC. Ole Miss hits the road after this one, playing three of their next four games on the road. Next up is a Saturday tilt with 10-11 Georgia in Athens.

“It’s always hard getting the first win after a losing streak,” said senior guard Terence Davis. “Once you get the win, it kind of relaxes you, but you still have to be in that attack mode.”