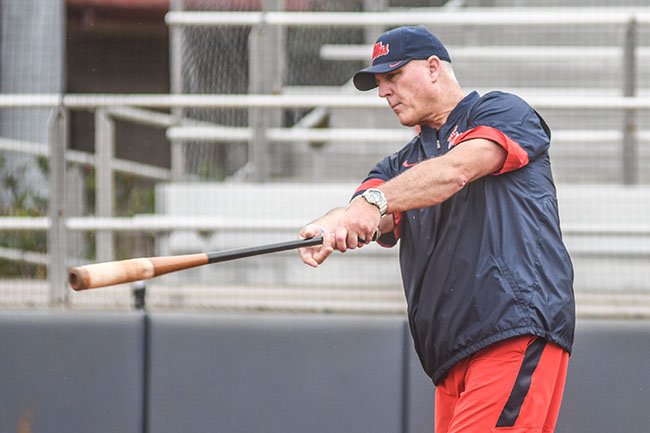 Ole Miss softball coach Mike Smith hits infield during softball practice in Oxford, Miss. on Tuesday, February 5, 2019. Smith has been suspended for the opening weekend for not meeting the university's expectations for operating the program. The Rebels open the season with five games at the Friends of Jaclyn Tournament, hosted by Central Florida. On Thursday Ole Miss plays UCF, on Friday and Sunday they play Ohio State, and on Saturday they play Minnesota and George Mason. (Bruce Newman, Oxford Eagle)

Ole Miss’ softball team left for their opening weekend trip to Orlando on Wednesday but will be without their head coach.

The school announced in a press release that Mike Smith would not be making the trip and was suspended due to ‘not meeting the university’s expectations for operating the program.’ The release also said associate head coach Ruben Felix would lead the team during their five-game stint in Orlando and that Smith would return to the field next week.

Smith is entering his fifth season as the Rebels’ head coach after being hired in May of 2014. Since his arrival to Oxford, Smith has guided the team to three consecutive NCAA Tournament berths and the 2017 SEC Tournament championship.

The Rebels begin their 2019 campaign against host Central Florida on Thursday ( 5 p.m. CT) at the UCF Softball Complex. They will also play Minnesota, Ohio State, Georgia Mason and North Florida during their weekend stay in Orlando.

Ole Miss deferred any further comment on Smith’s suspension to Wednesday’s press release when contacted by the EAGLE.