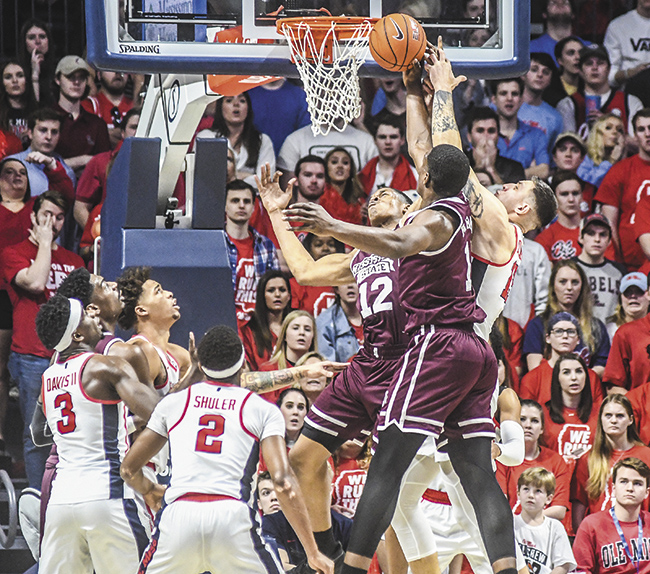 Ole Miss’ Dominik Olejniczak (13) goes for a defensive rebound but doesn’t get it against Mississippi State’s Robert Woodard II (12) and Reggie Perry (1) at the Pavilion at Ole Miss, in Oxford, Miss. on Saturday, February 2, 2019. (Bruce Newman, Oxford Eagle via AP)

OXFORD – Saturday’s loss to Mississippi State was a big-man’s nightmare. In the six-point loss, the Bulldogs out-rebounded Ole Miss 40-28 and gave up 15 offensive rebounds, seven to freshman Reggie Perry. Ole Miss was led in rebounding by two guards and a 6-foot-7 freshman who is very generously listed at 220-pounds. The big men, the guys who generally lead teams in rebounding, did just about nothing.

“It was just not pursuing the ball. We weren’t even rebounding balls in our area. When you get Dom (Olejniczak) and Bruce (Stevens) at the five and Blake (Hinson) at the four, they played 67-minutes between them and got one defensive rebound,” said head coach Kermit Davis. “You have to get someone go finish off possessions and that’s why they beat us on the glass. We have to start getting balls in our area and we have to start pursuing balls out of our area.”

Terence Davis led the Rebels in rebounding against Mississippi State with eight and leads the team in average rebounding on the year. Davis is 6-foot-4. If you look at the top players in the SEC in rebounding, Davis is the only Rebel in the top-30.

In most lineups, Kermit Davis plays either Olejniczak or Stevens at center, rarely together. Occasionally they will play K.J. Buffen there, the aforementioned 220-pound freshman, but this is for fleeting minutes. In 21 games, one of Stevens or Olejniczak has led the team in rebounding just seven times. This has happened just twice in SEC play.

To be fair, Kermit Davis has always preached that rebounding is a team effort. And the Ole Miss guards, especially Terence Davis, are solid rebounders. But when you have a 7-footer (Olejniczak) and another guy at 6-foot-8 and 250-pounds (Stevens), you need more output on the glass. They’ll get a chance to correct ship Wednesday.

Texas A&M and Ole Miss are currently in very similar circumstances. While Ole Miss has lost five of their last six games, the Aggies have dropped eight of their last ten. It’s an opportunity for Ole Miss to get back on track against a struggling team.

However, it’s hard to see just how much the Aggies have struggled. They beat a 16-5 Kansas State team on Jan. 26 and their two losses since are to No. 19 LSU and No. 1 Tennessee. They’ve played just about as rough of a week as you could have coming into Wednesday.

“When you turn their tape on and you watch some of their minutes against Tennessee, and I thought Tennessee played really well, (Texas) A&M’s quality of play was really good at times in those games,” Kermit Davis said.

Davis would go on to praise some of the Aggie players on his weekly SEC teleconference. Davis called Aggie big-man Josh Nebo “One of the most athletic front-line guys in our league.” At 6-foot-9 and 245 pounds, Nebo is averaging just 8.5 points and 5.8 rebounds a game, but his presence can really be found defensively, protecting the paint. Nebo is averaging 2.5 blocks per game, good for second in the SEC.

Texas A&M head coach Billy Kennedy highlighted Kermit’s efforts with the veteran Ole Miss squad during his press conference. He especially pointed out the guard play from Breein Tyree, Terence Davis and Devontae Shuler as a point of defensive emphasis for his team. Kennedy believed limiting turnovers and keeping the Rebels out of transition will be critical on Wednesday.

There’s not really a ton of off weeks in conference play, but on paper this is the easiest one the Rebels have had since the turn of the New Year. Ole Miss gets 8-12 Texas A&M on Wednesday at home before traveling to 10-11 Georgia over the weekend. It’s a stretch that’s critical to get the Rebels back on track and back in the national conversation. The Aggie game will be at 6 p.m. from The Pavilion on Wednesday night, televised on SEC Network.