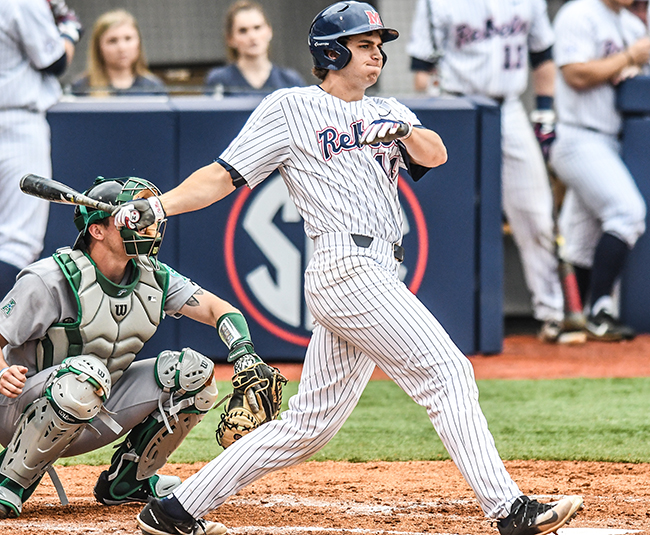 Zabowski enters as the Rebels’ lone first-team selection after earning SEC All-Defensive Team honors in 2018. The junior first baseman was also named a finalist for the Rawlings Gold Glove Award as he made just four errors in all of 2018, finishing with a stellar .990 fielding percentage.

In addition to his outstanding glove work, Zabowski had a great season at the plate. The Lawrenceville, Georgia, native hit .300 with 10 home runs and 44 RBI. After a strong summer with the Fond du Lac Dock Spiders and an excellent fall in Oxford, he’ll return as one of the top bats in the Rebel lineup.

Caracci leads a group of three Rebels on the second team, adding to a litany of preseason honors for the redshirt junior closer. Earlier this week, Caracci earned his fifth Preseason All-American nod of 2019.

The redshirt junior out of Jackson was selected in the 37th Round of the 2018 MLB Draft by the Toronto Blue Jays, but he elected to return to Oxford for 2019. Caracci, who played at Jackson Prep in high school, earned three All-America nods at the conclusion of the 2018 season. He was also named second-team All-SEC and was a midseason All-American, in addition to an SEC Pitcher of the Week honor on April 2.

Caracci totaled 10 saves last year, tying him for the seventh-most in a single season in program history. Caracci also amassed 73 strikeouts in 48.0 innings pitched, compared to just 14 walks for a 5.2 strikeout-to-walk ratio. He allowed just 38 hits and maintained a 2.25 ERA.

The outstanding season earned Caracci a spot on the USA Baseball Collegiate National Team for the summer, where he posted a perfect 0.00 ERA in 9.2 innings of action, compiling a pair of saves and a .094 opposing batting average.

Cockrell secured second-team honors in the DH/Utility slot after a tremendous junior year at the plate. The senior out of Bastrop, Louisiana, hit .317 a year ago with nine home runs, 38 RBI and 37 runs scored.

Cockrell was named a semifinalist for the Dick Howser Trophy, given to the national player of the year in college baseball. He’s already off to a hot start for the Rebels this spring, hitting a team-best .458 with three home runs and six RBI through five intrasquad scrimmages.

Keenan also landed on the second team after putting together one of the best seasons by a freshman in Ole Miss history. The third baseman out of Clayton, North Carolina, earned Freshman All-America honors from Collegiate Baseball and Perfect Game after hitting .301 with nine home runs and a .520 slugging percentage. He was also outstanding at the hot corner, making just five errors all season.

Keenan is no stranger to SEC accolades, as he was named SEC Freshman of the Week twice last season. He was also the first Rebel freshman since Alex Presley in 2004 to be named SEC Player of the Week, and he was the only rookie in the conference to accomplish the feat in 2018.

In the Western Division, Ole Miss was picked behind only LSU, a team picked No. 1 in the nation in several preseason polls.

The Rebels will open the 2019 season at home with a three-game series against Wright State, a 2018 NCAA Tournament team. Opening day is Feb. 15 as the Rebels host the Raiders for a 4 p.m. CT first pitch. Ole Miss opens SEC play at home against Alabama on Mar. 15.