Oxford doubles down on Coffeeville on senior night 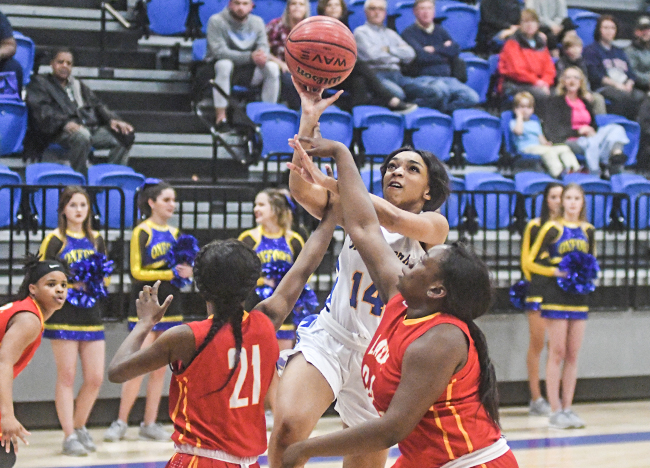 OXFORD – The Chargers were dominant in their final tune-up before next week’s divisional tournament, with both the boys and girls blowing out the Coffeeville Pirates to end the regular season slates on a high note. The pair of wins take the Oxford girls’ final regular-season record to 15-13 and the Charger boys to 22-5.

It was senior night at Oxford, and the Lady Chargers went all out. Cliff Orman’s squad touted a starting lineup of nothing but their five seniors. The senior five got off to a hot start, scoring seven of the first eight points before Oxford would bring in the normal unit. The hot start brought on by the seniors would help the Chargers to a 16-6 first quarter lead.

“You’re excited for those seniors that are moving on, but it’s always a tough one for a coach,” Ormon said, talking about senior night. “You want to win every game, but there’s a lot of things with relationships that go on as a coach between players that make it special.”

It was the first win on the month for the Oxford girls, some needed confidence going into the regional tournament. Ormon said he hopes the girls can draw from seeing the ball go through the basket against the Pirates, going into a tough slate of regional games ahead. Four Chargers scored in double figures, led by senior forward Kelsey Wilborn’s 15 points.

“Hopefully we built some confidence off of this game. We got out in transition and we’re able to attack,” Ormon said. “Columbus is going to be a very tough test that first game… it’s not going to be easy, but we’ve been in every game we’ve played with them.”

Oxford Boys down Coffeeville for win 22

The first game between the Chargers and Pirates on Jan. 11 was one of the highest scoring total games on the Charger schedule to date. Oxford and Coffeeville combined for 150 points in that one, with Oxford winning 87-63. Thursday night’s game didn’t have quite the same fireworks, but it did have the same outcome. Oxford won 73-62.

Oxford started the second half right where they left off, scoring 12 of the first 16 points and quickly increasing their six-point lead to 14. They would win the game 73-62, also playing their two lone seniors, Andree Baskin and Landon Norris, the majority of the second half. Juniors Kylan Blackmon and Tykel Owens led the Chargers with 18 points each. Baskin chipped in 16 more.

Next up for the both Charger teams is the 6A Region 2 tournament in Tupelo. The Oxford girls will play Columbus in the opening round Tuesday Feb. 12 at 4 p.m., followed by the Oxford boys at 5:30 also playing Columbus. The final round and consolation game of the regional tournaments are played Friday Feb. 15.