Back on solid ground, Ole Miss travels to Georgia 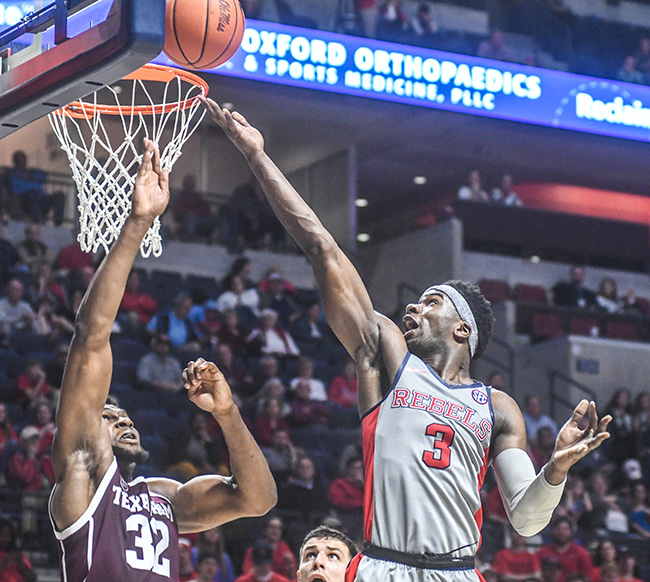 OXFORD – Ole Miss had to beat Texas A&M on Wednesday night. Until the final five minutes of play, they seemed to be doing everything in their power not to. Kermit Davis’ new era of Rebels hadn’t experienced the type of downtrodden losing that became commonplace in their four-game losing streak leading into Wednesday night. The 75-71 win over the Aggies may not have been pretty, but it got the ship back on course.

Terence Davis, despite being a senior, can have a tendency to get lost at times on defense. He has all the athleticism and tools to be a great defender, the concentration just isn’t always there. Wednesday was arguably his best defensive game as a Rebel.

“He kind of put us on his shoulders tonight. He’s been terrific in practice the last two days,” Kermit Davis said. “I thought tonight, when the game got a little sideways, he was the guy that made all the plays.”

As a team, Ole Miss turned Texas A&M over 18 times, leading to 31 Rebel points. In 34-minutes of play, Terence Davis had a career-high seven steals. In one critical late-game sequence, he had steals on back-to-back Aggie possessions, leading to five Breein Tyree points and giving Ole Miss its first lead since very early in the second half.

“We watched film on the last game against Mississippi State and I was just walking around and not in a (defending) stance,” Terence Davis said. “Tonight, I just wanted to come in and accept the challenge and do the things that I need to do to be successful.”

Kermit Davis said the team was “in desperate need of a win” and the Aggie game was “much needed.” In reality, the team needs more than just one win over a Texas A&M team that is now 1-8 in the conference. The Rebels need to string a few wins together again, starting Saturday afternoon at Georgia.

Like Ole Miss, Georgia is in their first year under the tutelage of a new head coach. Unlike Ole Miss, it was a roster that didn’t fit what new head man Tom Crean wants to do. Crean’s Bulldog team is in rebuild mode, and it’s not something they’re shy of talking about.

Georgia lost again on the road Wednesday night at Alabama, dropping their SEC record to 1-8. Their one win is over a Vanderbilt team who is yet to win a conference game. Unfortunately for Ole Miss, one of the few things Georgia does well, is one of the Rebels’ biggest weaknesses.

Nicolas Claxton leads the SEC in rebounding for the Bulldogs with 9.3 per game. Including Claxton, they have three forwards that average six rebounds or more. Ole Miss has one player – Terence Davis – averaging six or more rebounds, and zero forwards even close to that mark.

Ultimately, despite their strengths in rebounding, Georgia is one of the worst teams in the conference. Georgia ranks 105 nationally in both the NET ratings and Kenpom. Like the Texas A&M game, it’s one the Rebels must win if they want to keep their tournament hopes alive. The game will take place at noon on Saturday from Athens, Georgia, and televised on SEC Network.