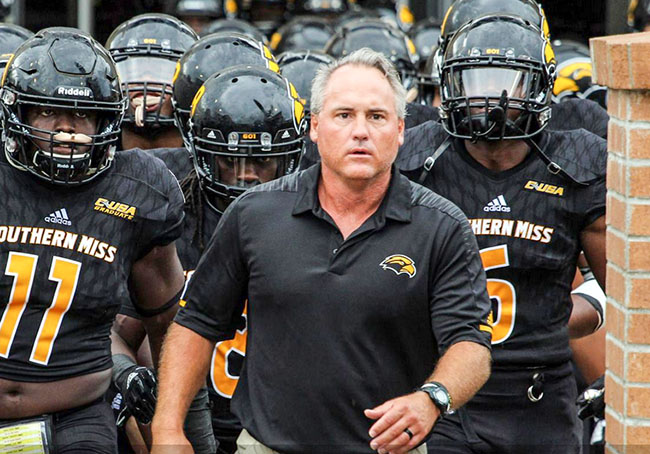 Southern Miss has an open offensive coordinator spot, one Hopson wanted to fill with former Baylor head coach Art Briles. Without any semblance of approval from the university or interim athletic director Jeff Mitchell, Hopson interviewed Briles for the job on his own. Relatively innocent mistake, right? Not likely.

Briles was fired from Baylor in 2016 after an investigation revealed the university had mismanaged more than a handful of sexual assault allegations against over a dozen players in the football program. He received a $15-million severance from the school and Baylor is still awaiting results of an NCAA investigation into the matter.

It’s a public relations nightmare for Hopson and USM. The university released a statement after saying that Briles was no longer a candidate for the coordinator position. Hopson should’ve ended things there. However, he doubled down, releasing his own statement on Twitter:

“Although I respect the decision of (USM president) Dr. Rodney Bennett, I disagree with it. I am so grateful for the grace (and) forgiveness God gives me which allows me to inherit his kingdom, which I do not deserve,” Hopson said. “I have interviewed Art Briles for an assistant position (at) Southern Miss (and) I believe he is a man who deserves a second chance. He is a man that seemed sincere (and) humble in his interview (and) personally he committed no crime.”

“He may not have acted in the proper protocol, but that would be my job at Southern Miss! He was interviewing for an assistant position, even though I believe he will be a head coach at a major program in the near future. However, I believe he is a man who does love the Lord and deserves a second chance. He was banned from employment in college football for (three years) and has been punished. I understand both sides have opinions, this is just mine!”

Hopson seems out of touch. The fact he is willing to put football Xs and Os over a general sense of humanity and empathy is concerning. There’s a difference between giving someone a second chance and paying someone six-figures to call plays after years of covering up multitudes of sexual assault cases in order to win football games.

Jay Hopson’s wife, Michelle, has come to his defense.

“#SecondChances,” Michelle Hopson’s message read on Twitter. “My husband is the head coach, not Art Briles. I trust his integrity and the way he runs his program.”

I feel confident I’m not alone in thinking  there are not a lot of people who trust the way he runs his program anymore. Putting your bosses on blast on Twitter isn’t the best approach for running  a program with integrity. In fact, it sounds like an easy way to lose your job.

All this to say, Hopson should’ve never interviewed Briles without permission. He wouldn’t have made it this far in his coaching career if such behavior was standard of his professional character.

While Hopson is entitled to his opinions and should have the ability to make decisions he believes are best for his football program, his approach to start a fire without a flame is perplexing. However, it’s concerning for reasons far greater than his competence as a head football coach. It digs to his character as a man.

Coming up Commodore: Lafayette girls set for 5A State…