Coming up Commodore: Lafayette girls set for 5A State Championship 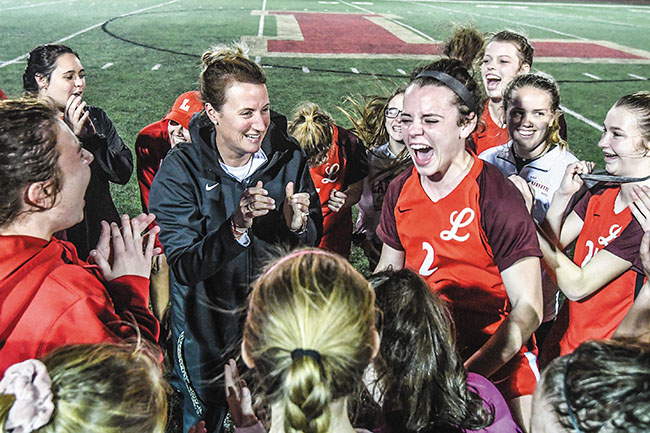 OXFORD – Melinda Scruggs’ Lady Commodore teams have been in this position, just not on this level. After beating Lewisburg 1-0 on Tuesday, the Lafayette girls are set to play their first ever Class 5A State Championship game on Saturday.

Scruggs led the Lafayette girls to back-to-back state championship appearances in 2015 and 2016, winning in 2015 when Lafayette was a Class 4A school. Now in their second year as a 5A school, Scruggs has brought the girls full circle. The Lady Commodores are back in the state title game. However, this Commodore team as a completely different unit, and a very young one.

Lucy Wilson leads the team in goals with 23 as a sophomore. Julia Perkins, an eighth grader, is second in goals with 21. The leader in assists? You guessed it, another sophomore – Katelin Johnson. The team even plays a seventh grader, Lillie Grace McCutchen, valuable minutes.

“I don’t really think twice about the experience part,” Scruggs said. “The way they treat each other (makes it) really, truly feel like a family. It’s like ‘hey I’m going to put you on my back and carry you through it.’”

Wilson admitted after scoring the lone goal in Lafayette’s 1-0 win over Lewisburg to clinch the North Half crown that the team was cocky and they came out nervous. While it’s clearly a young Commodore team built to compete for years to come, right now Scruggs just needs to get them up for one more game.

“It feels amazing, but it’s not just me. It’s my whole team,” said Lucy Wilson, talking about being a young, integral member on a state contender. “We’re really like a family and I love that.”

On the other sideline, Long Beach has both been here before and done so at this level. Saturday’s showdown will mark the second straight 5A State Championship appearance for the Lady Bearcats, who lost last year to Germantown in four overtimes. There’s one big difference for the 2019 Bearcats – it’s the first year for head coach Haley Hammons.

“It’s amazing. I graduated from here so to be back and getting to go to state my first year I couldn’t have imagined,” Hammons told WXXV 25 in Hattiesburg after their South Half victory. “I’m so excited right now.”

Like Lafayette, Long Beach is a team that needs to get a lot of production from young girls. Their leading scorer with 15 goals on the year, Nathalie Salvador, is a sophomore. Salvador also leads the team in assists.

Long Beach went 15-6-2 in the regular season and is ranked No. 20 in the state according to Maxpreps. For reference, Lafayette is No. 10. The schools have faced no similar opponents, and both come into Saturday’s game having won six straight games. Neither school has even surrendered a single goal over the win streak. Something will have to give Saturday in Brandon.