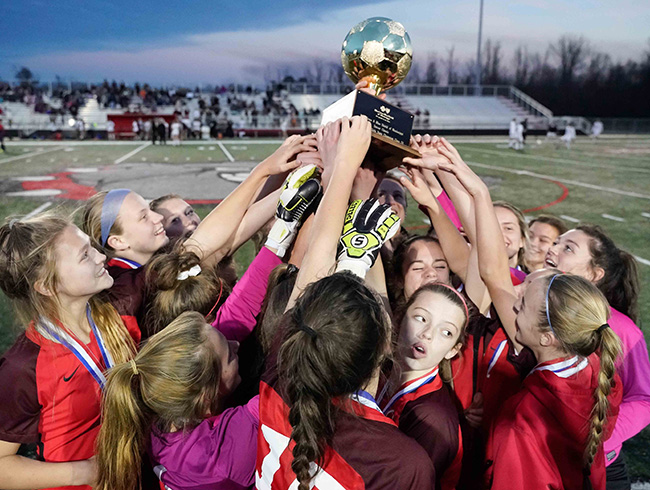 BRANDON – The Lady Commodores are champions. Lafayette dominated Long Beach on Saturday en route to their first ever Mississippi Class 5A State Championship, winning 5-1. The Hollywood-esque ending to a 24-2 season, the Commodores are bringing the MHSAA state soccer trophy back to Oxford.

“It just leaves me in awe. I’m kind of speechless,” said Lafayette senior Kaitlyn Moss, fighting though tears. “We did not expect (five goals). We thought it was going to be a tough game until the final end. I was really surprised we came off with five, but I knew these girls could do it.”

Lafayette controlled the game from the start, dominating possession of the ball and out-shooting Long Beach 5-0 over the first twenty minutes. It was shot number six that kick-started things for the Commodores. Lucy Wilson’s right foot put Lafayette on the board first in the 21st minute, getting the scoring rolling.

Shortly after, in the 27th minute, Long Beach’s Julia Geetsema got a head of steam past the Lafayette defenders, finding Amanda Anderson for the first Bearcat goal. Anderson’s goal would tie the game 1-1. The first Lady Bearcat goal evened things momentarily, but Lucy Wilson and Lafayette were not done.

A great spin by Lafayette freshman Hudson Lindsay split two Long Beach defenders. Her shot would be deflected back to her, but she would pass it back to Lucy Wilson, who’s one-timed shot from outside the box found the back of the net late in the half. Wilson’s second goal on the evening put the Commodores up 2-1 at halftime.

“Coming into this game, you just don’t know what to expect. We don’t play teams from the south very much,” said Lafayette head coach Melinda Scruggs. “Once they scored momentum went their way for a bit. We were able to settle in and getting a second goal gave us a little more confidence, especially before half.”

Wilson needed just six minutes into the second half to complete the hat trick. Wilson scored her third on a breakaway in minute 46, before senior midfielder Kaitlyn Moss scored her own just three minutes later. Just like that, the Lady ‘Dores had blown the lid off, leading 4-1 early in the second half. They would run away with the title, iced off by a Katelin Johnson goal in minute 65.

“It feels awesome; I’m so excited,” said sophomore Lucy Wilson. “I think I cried a little bit. It’s really awesome. We’re like family: our slogan is we over me. We just knew how to play, and we came in and just did it.”

The win was a perfect cap to a dominant stretch of games for the Commodores, who have won seven in a row to close out the year, outscoring opponents 39-1. Lafayette had made it to back-to-back 4A state titles in 2015 and 2016, winning in 2015. This was their first final appearance as a 5A school.

A team that gets consistent and valuable minutes from a number of underclassmen, and even middle schoolers, they have a great chance to be back here in Brandon next year. But for now, the Lady ‘Dores are the 2019 5A State Champions.