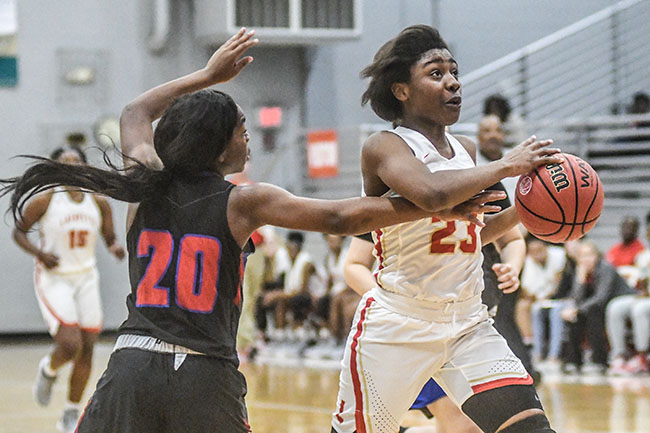 Lafayette and Oxford basketball polished off the end of their regular season schedules late last week, with Oxford picking up two wins over Coffeeville and Lafayette splitting with Ripley. The wins push the Oxford boys to 22-5 and the girls to 15-13. With the win, the Lafayette girls go to 24-3 and the boys dropped to 5-21.

Next up are the divisional playoffs. Lafayette will travel to West Point for their 5A Region 2 tournament with Oxford squaring off in Tupelo with their 6A Region 2 foes. The two-round tournaments tip off on Tuesday, with championships and consolation games played Friday.

Both of the Lafayette teams will draw Grenada in the opening rounds. For the ladies, it’s a matchup they’ve dominated in 2019, beating Grenada twice, winning by an average margin of 21.5 points. Then again, who haven’t the Lady Commodores dominated? In 27 regular season games, they’ve given up only 50 points twice, and haven’t done so since November. The last time they didn’t score 50 themselves was January 5.

Without senior Xhirr Burgess for the entire season due to an ACL injury, the Lady Commodores have been led by a pair of juniors and senior Mariah Holland. Azariah Buford and Kimaya Dixon, the juniors, lead the team in scoring 17.4 and 15.6 points, respectively. Holland cleans up on the glass, leading the team with 8.1 rebounds.

The boys have struggled recently. Losers of ten in a row, they haven’t won a game since the turn of the new year. Tuesday, they’ll be matched up against a Grenada team that beat them by 27 points in their most recent matchup.

Going into their showdown with Columbus on Feb. 1, Oxford boys head coach Drew Tyler said they had not beaten Columbus in a long, long time – decades even. On Feb. 1 they beat the Falcons at home by 22, earning them a season split with Columbus.

However, the most recent meeting was arguably meaningless. Both schools had secured their spot in the regional tournament, and they were just playing to see what color uniforms they would wear when they play again Tuesday. Oxford head coach Drew Tyler admitted there are things they didn’t show that game against Columbus, and assumed the Falcons were doing the same.

“We just have to limit them to one shot and be the aggressor the entire game. I feel good about us moving to the finals on Friday,” Tyler said. “We do what we did when we played them here and win every quarter. That’s our plan.”

On the other side, to say the Lady Chargers have struggled against Columbus would be an understatement. However, what you could say is they were better with each showdown. The first time Oxford and Columbus met, the Chargers scored just 17 points in the loss. On the Feb. 1 showdown they eclipsed that in the first half. Charger coach Cliff Orman is confident, saying the girls did some good things against Columbus last time they played.

“Columbus, and we played them twice, is going to be a very tough test that first game,” Ormon said. “We think as a coaching staff, that this team deserves to get out of the tournament. Four good teams and we’ve been in every game we’ve played with them, even if the final scores don’t indicate that.”

All four teams will get two games in the regional tournaments, regardless of outcome. With opening round games played Tuesday, teams will get a chance to reboot before Friday’s championship and consolation games.