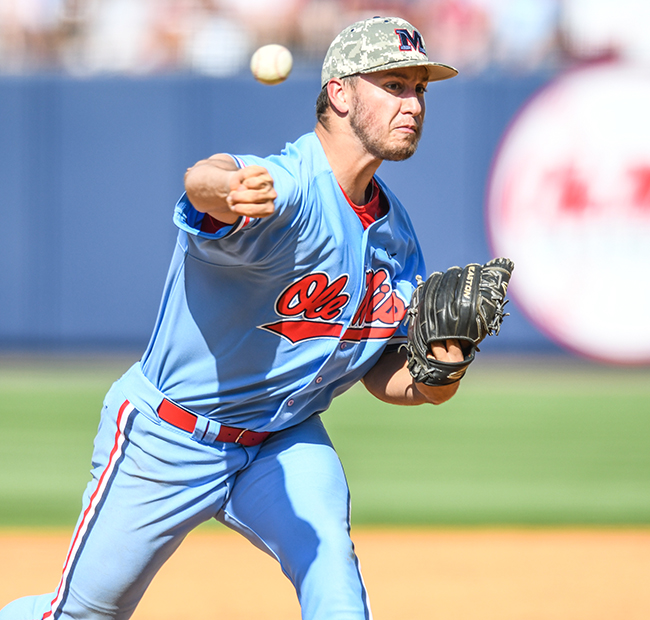 Starting on Friday nights will be Will Ethridge, the junior righthander from Lilburn, Georgia. We reported two weeks ago that Ethridge, but the other two spots had been up for grabs all throughout spring ball and intersquad play. Bianco said Ethridge left no doubt in the coaching staff’s mind that he was the guy to lead things off for the Rebels.

The Saturday and Sunday rotation slots will be filled by junior lefthander Zack Phillips and freshman righthander Gunnar Hoglund. Unlike Ethridge, who has significant experience throwing at Swayze Field, the other two weekend starters do not.

A junior college transfer, Zach Phillips spent his first two years in college at Grayson Community College in Texas. At Grayson CC, he went 10-1 with a 2.70 ERA.

“He’s got electric stuff and we knew that from the fall. He’s really pitched well the last couple weeks of intersquads,” Bianco said. “He’s been dominant, and he gives us a little different look with a left-hander sandwiched in-between Will and Sunday starter Gunnar Hoguland.”

From Hudson, Florida, Gunnar Hoglund was named the All-USA Florida 1st team pitcher in 2018, as a senior in high school. He went 7-0 as a starter, recording a 0.27 ERA last year in high school, all while sporting a .385 batting average. A 2018 first round pick by the Pittsburgh Pirates, Bianco said that Hoglund will have a chance to hit as a Rebel, just maybe not much so this year.

“I mentioned Will having the best fall and spring of any pitcher, and the second without a doubt is Gunnar,” Bianco said. “He’s a guy that possesses a big-time fastball but a good breaking ball and changeup. He has excellent command and can really throw the ball on both sides of the plate. For a true freshman, he has a lot of poise.”

Another name previously in the mix for one of these three slots is that of junior Houston Roth. Bianco said that Roth will be the first guy out of the bullpen on Friday night. He will also have a chance to start in a mid-week role. That role Bianco acknowledged as critically important to pick up non-conference wins.

“Last year will show you how important those mid-week games are. You have to win on Tuesday’s and Wednesday’s to help your overall record,” Bianco said. “At the end of the season, when it’s selection time, certainly one of the reasons we were a national seed and had such a good RPI was that we only lost one mid-week game.”

While these are the starters for this weekend’s slate of opening games, Bianco certainly left room for alterations to that weekend rotation. He said that the goal over the next few weeks of games between Friday and the start of SEC play against Alabama on Mar. 15 was to have that rotation set into stone and for them to know the bullpen roles.

The Rebels take the field for the first time Friday evening at 4 p.m. from Swayze Field, their opening three-game series against Wright State.