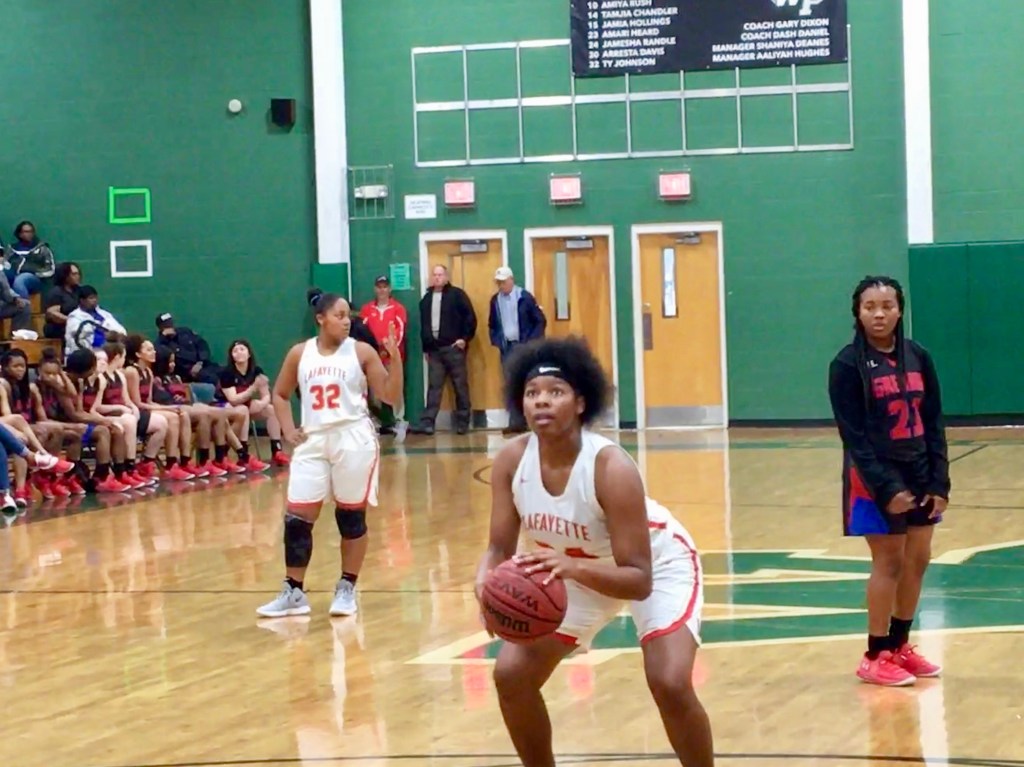 Lafayette's Mariah Holland converts on an and-one free throw in the regional tournament against Grenada on Tuesday, Feb. 12. (Nathanael Gabler/OxfordEagle)

WEST POINT – One of the best defensive performances the Lady Commodores have shown on the season led to a very frustrated Granada team on Thursday night. The Lafayette girls blew out Grenada 54-19 in the first round of the Class 5A Region 2 tournament.

Pressuring the perimeter defensively was clearly an emphasis from the start for Shayne Linzy’s squad. The Commodores forced a handful of early turnovers early and forced Grenada to go 0-5 from three to start, however, the usual crisp Commodore offense was flustered itself, committing numerous early turnovers and only scoring 12 in the opening quarter of play. It was only more of the same in the second quarter for the Lady Commodores. They completely shut down the Chargers, but scored just twelve more, en route to a 24-6 halftime score.

“The first quarter, we were aggressive. We were attacking the lanes and getting to the free throw line. The second quarter we were just shooting threes and we missed,” said Linzy. “So we went back inside and got our confidence back, then we started kicking it outside and shooting threes.”

It was the best defensive game of the year for the Lady Commodores, holding the Chargers to just 19 points. Their previous season low point against was a Jan. 12 game against Madison-Ridgeland Academy when they allowed just 25 points. In their two regular season games against Grenada, the Chargers averaged 40 points. Tuesday was much, much different.

“Defensively, I thought we were really good. Even when the young girls were out there, it may have looked a little crazy at times but they actually played pretty well,” Linzy said. “I just thought we did a really, really good job defensively. They really stepped up and played well.”

Kimaya Dixon and Azariah Buford both chipped in 12 points to lead the way for Lafayette, with Dixon also leading the team in rebounds with five.

The win moves the Lady Commodores on to the Region 2 finals, where they will play the winner of Saltillo and West Point on Friday afternoon.

The Lafayette boys team that has been run out of the gym twice prior this year by Grenada held their own in the first half on Tuesday. Regardless of the final score, falling 72-34, it was a much better played game than their 25- and 27-point to the Chargers in January.

Like earlier in the girls game, defense held Lafayette in it early. The boys held Grenada to under ten first-quarter points. They would tie the game in the second quarter at 17, before the Chargers went on a 9-2 run to close the half.

Grenada flipped a switch at halftime. Coming out of the gate shooting the lights out and forcing a lot of third quarter Commodore turnovers, they scored more in the third quarter than they did the entire first half. Grenada led just 26-19 at the half, but by the end of three quarters it was 58-29. Like the first half, the fourth was more balanced, Lafayette was simply unable to overcome the deficit.

“The bottom line with us is we can’t score,” Gray said. “For the most part we defend well enough to give ourselves a chance, we’re just not very good offensively.”

The Lafayette boys will play the loser of West Point and Saltillo on Thursday afternoon from West Point.