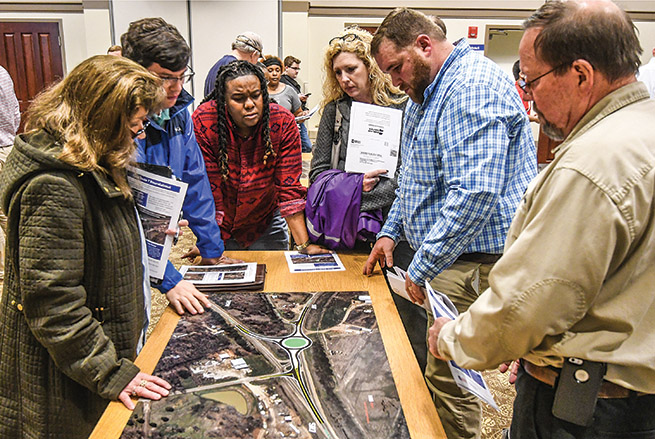 North Mississippi Regional Center employees look over designs of a proposed roundabout at the intersection of Highways 7 and 9 south of Oxford, Miss. during a Mississippi Department of Transportation public meeting on Monday, February 11, 2019. (Bruce Newman, Oxford Eagle)

With construction of a roundabout at the Highway 7 and Highway 9 intersection set for later this year the Mississippi Department of Transportation held a public meeting with Lafayette and Yalobusha County residents at the Oxford Conference Center on Monday to discuss any concerns and answer any questions they might have.

MDOT had several staff members on hand, including executive director Melinda McGrath. There were several tables set up with renderings of what the completed project will look like as well as a video showing animation of how traffic will flow throughout the roundabout.

“I think there is concern about a roundabout because they’re comparing it maybe to the three, four, five that are (in Oxford),” McGrath said. “Those really aren’t designed for trucks. They’re really designed for really low speed and cars. This one is going to be much like the one that we built two years ago in Copiah County that definitely accommodates trucks. It’s high speed and it works really well.”

The intersection of Highway 27 and Lee Avenue just east of Crystal Springs saw three fatal crashes and 16 crashes that resulted in injuries from 2006 to 2017. Since the roundabout was constructed at the intersection in 2017 there have been two crashes and zero reported injuries.

The project has been met with a lot of criticism and push back since the announcement of the meeting earlier this month. There were also some who attended the meeting who viewed the roundabout as positive addition to the intersection.

“I don’t have a problem with it,” Jerry Lee of Oxford said. “I think it will probably handle the traffic a little bit better. The highway department should know a lot more about it than I do and they must think it’s a safety thing. Overall, I’m yielding to what the department of transportation says.”

Bids for the project will begin to be taken in April with a schedule start time to begin construction set for summer. The project should be completed by the end of this year if it stays on schedule.

There was also a rendering of a future project to alleviate issues where South Lamar enters onto Highway 7. The project was awarded $1 million in the latest appropriations bill by the state but is still lacking around $1.8 million before the project can begin.