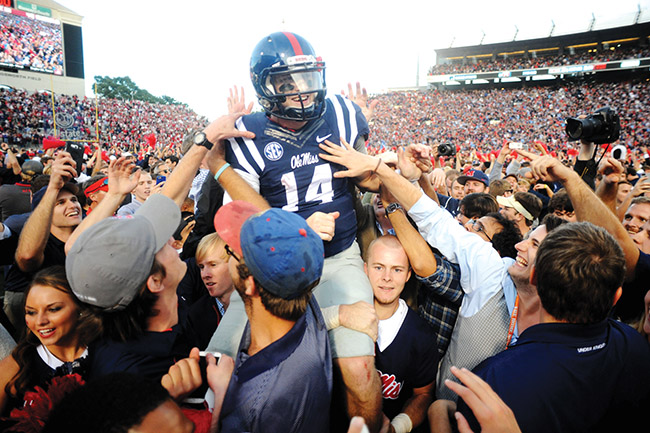 Ole MIss quarterback Bo Wallace (14) is carried off the field by fans following the win over Alabama at Vaught-Hemingway Stadium in Oxford, Miss. on Saturday, October 4, 2014. The Rebels won 23-17. Ole MIss vice-chancellor for intercollegiate athletics Ross Bjork announced Monday that the victory is one of 33 that Ole Miss has vacated, (Bruce Newman, Oxford Eagle via AP)

OXFORD – A handful of Ole Miss football games over the course of the decade will no longer exist in the record books. As a final step in the NCAA sanction course, the Rebels will be vacating 33 wins over the course of seven seasons from 2010 to 2016. The bulk of the vacated wins will be seven apiece from 2012 and 2013 and eight wins from 2014.

No games from the ten-win 2015 season that was capped with a Sugar Bowl victory will be lost. This because the ineligible player(s), notably former left tackle and current Miami Dolphin Laremy Tunsil, were suspended to start the season.

“It’s the last part of this process,” Ole Miss Athletic Director Ross Bjork said Monday in their town hall meeting in Cleveland. “In a way, it’s just a piece of paper, because you saw those games.”

Underlying sanctions for the vacating of wins stem from the same NCAA investigation that determined the football program under former head coach Hugh Freeze lacked institutional control. It’s the same investigation that led to the 2017 and 2018 postseason bans and scholarship reductions. However, these vacated wins also include six wins from the Houston Nutt coaching era, reportedly due to standardized testing violations.

The most notable lost game from the stretch is likely the 2014 win over No. 3 Alabama, when 13 fourth-quarter points and Bo Wallace’s three touchdown passes lifted the Rebels to a 23-17 win.

Following the vacated wins, Hugh Freeze’s record in his five-year stint at Ole Miss dropped from 39-25 to 12-25. He’s now just 6-21 in SEC play. Liberty University hired Freeze in December to run their football program. Additionally, Nutt’s record at Ole Miss falls from 24-26 to 18-26 (9-22 in the SEC).