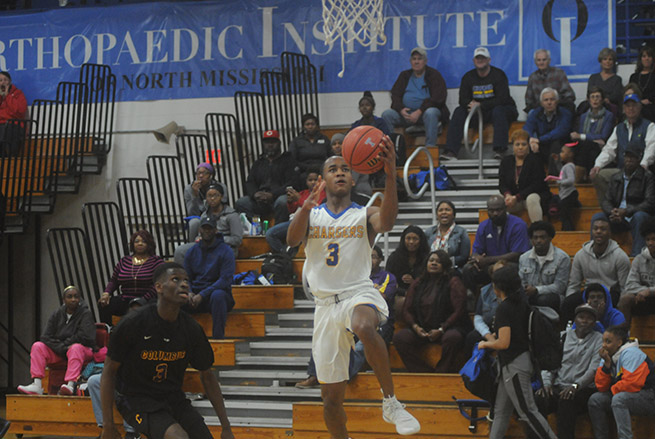 TUPELO — Oxford likes to play fast. They thrive on speed, but on Tuesday they had to play a few gears slower in their game against Columbus in the Region 2-6A tournament opener at Tupelo High School. The Chargers won 46-37, punching their ticket to Friday’s tournament championship game against Tupelo at 8:30 p.m.

Tuesday’s win also secures a home game next week in the MHSAA Class 6A state playoffs and another win on Friday will give the Chargers (25-3) a first round bye.

“If we hold up a trophy on Friday night and be region champs, it’s one less game we have to win to be able to get to the Coliseum in Jackson. That’s our goal,” Oxford head coach Drew Tyler said. “When you win 25 games and you put yourself in the region finals and if you can hold the trophy up and be the champ it adds a little validity to what you’re doing.”

The first half was not full of fireworks with Columbus playing a very deliberate pace on offense, effectively keeping Oxford from utilizing their transition offense off a rebound or a turnover. After the first 16 minutes, the Chargers took a 16-11 lead into halftime.

In the third quarter, the Chargers were able to kick their offense into gear and matched their first half points total in the first eight minutes of the second half. Columbus tried to hang around but their inability to score and lack of urgency in the final minutes sent them into Friday’s third place game against South Panola where the winner advances to next week and the loser will have their season end.

“We play our best basketball in transition,” Tyler said. “Even out of different defenses, in zone defenses, (JJ) Pegues and (Kylan) Blackmon do a good job of getting pass outlets and therefore Columbus wanted to slow it down. With us having the lead and them slowing the ball down that played into our hands, which we were OK with. We just had to play with a little discipline and make sure that we were blocking out and giving Columbus only one shot. For the most part we did that.”

JJ Pegues and Derrius Southern each had a game-high 10 points, Kylan Blackmon and Tykel Owens each scored 9 points and Byron Pearson added 6 points.

Lady Chargers’ season on the brink

In the first game of the afternoon Oxford’s girls also played Columbus but the Lady Chargers did not duplicate the boys’ success, falling 64-36 to the Lady Falcons.

With the loss, Oxford will face South Panola in the girls’ 3rd place game at 4 p.m. on Friday and their season will be on the line.

“I told them in a lot of tournaments this is a put-out game in a lot of divisions. In 6A you still have one more opportunity,” Oxford head coach Cliff Ormon said. “We can’t let this carry over into (Wednesday’s) practice and Thursday’s practice and prep for whoever we play on Friday.”

“There’s no doubt (Columbus) is a very good team and you hope they’re not playing well when you play them,” Ormon said. “Tonight they were shooting the ball great. We didn’t have the execution we needed offensively and defensively and we let them kind of get off to that hot start. They were really good and pulled away. I thought our third our kids did respond but it was a little too late.”

A strong third quarter effort closed the gap slightly but Oxford could never get any closer than 20 points the remainder of the game.