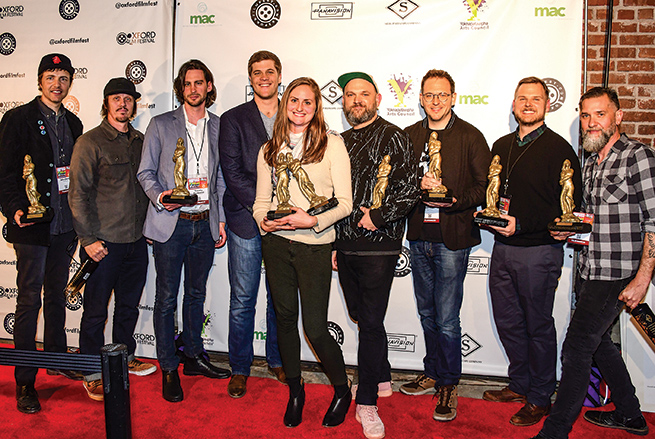 The 16th edition of the Oxford Film Festival concluded on Sunday, but the weekend was officially capped off with the awards ceremony on Saturday night. The ceremony was held at the Powerhouse Arts Center where the new Hoka statuette was given to winners in several categories ranging form music videos to short films to narrative features.

A jury who screen the films and vote on a winner decides each category’s winner. They also hand out a juror prize.

In the main category of the festival, ‘This World Alone’ took home best narrative feature. The movie is takes place after a cataclysmic event leaves the world without technology or power where a girl must learn to survive with her two makeshift parents. The Mississippi feature category had seven films competing with ‘Door Ajar – The M.B. Mayfield Story’ taking home the Hoka. The movie is about an African American janitor of a high school during segregated Mississippi who sits inside a broom closet and learns about art.

In the short film category ‘Happy Birthday, Papa’ and ‘Roots and Wings’ earned special jury prizes in the Mississippi category. The winner for narrative shorts was ‘Lil Mouse – What are you Looking At?’

The LGBTQ category there was a tie for short films. ‘All We Are’ and ‘The One You Never Forget’ shared the honor for best LGBTQ short film. ‘The Gospel of Eureka’ took home top prize in the LGBTQ feature category. The film chronicles evangelical Christians and drag queens as they explore the meaning of belief.

In the documentary categories, ‘The Conquerer’ took home best documentary short award and received three days of audio postproduction from Taproot Audio Design in Oxford and a $250 check. The film tells the story of a janitor who is a pro-boxer at night in Philadelphia as a way to improve his life. The documentary feature winner was ‘WRESTLE’ which told the story of a high school wrestling team from Huntsville, Ala. as they strive to reach the state finals and they obstacles they encounter through everyday life.

The directors for ‘WRESTLE’, Suzannah Herbert and Lauren Belfort, were awarded the Alice Guy-Blanche filmmaker ward for their documentary. The award is given to an emerging female director each year and also receives a $1,000 check.

“The team was very excepting of women filmmakers and I think we brought a lot of empathy and sensitivity to the story,” Hebert said.

Due to various scheduling conflicts, next year’s festival is moving from its regular slot of early February and will take place March 25-29, 2020.