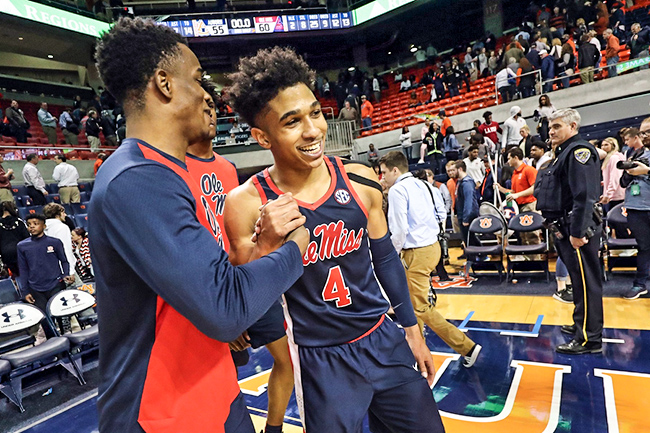 Kermit Davis’ Rebels were picked to finish last in the SEC. Tonight Ole Miss beat Auburn on the road, 60-55, to pick up their seventh conference win. Going on the road to Auburn is one of the harder games on any SEC schedule, and the Rebels have now won three in a row after dropping four straight.

The first half was arguably the best 20 minutes this team has played defensively all year. Bryce Brown, who scored 23 against Ole Miss in the first meeting in Oxford was held to 1-6 shooting and had just five points in the half. While the Rebels weren’t able to muster up many points themselves, they were able to play well enough defensively to hold a 30-24 lead at the half, leading by as many as 10 with 2:42 left in the period.

Terence Davis missed most of first half after picking up two early fouls. He would then pick up two more quick ones early in the second half. He played just 13 minutes in the game and scored only eight points. Auburn would go on a quick run following Davis’ fourth foul, cutting the lead to as little as two points before a very rare Zach Naylor three pointer ended the run. Naylor was just 1-5 on the year from downtown before that shot. Ole Miss would slowly grow the lead before Auburn made it close late. The Rebels would hang on to win by five.

Breein Tyree led Ole Miss with 20 points and three steals. Devontae Shuler added 17 points and five assists of his own. These two guards were also key defending two of the SEC’s leading scorers in Brown and Jared Harper, holding the two to a combined 18 points.

It’s not like this team has been a hound on the defensive end all year. Despite holding Auburn to just 55 tonight and Georgia to 64 on Saturday, they gave up an average of 82 points per game over the four-game stretch prior to Georgia. It’s a good sign for the Rebels to play so well on that side of the ball. Even better being able to do so one the road. With the win they move to 17-7 on the year.