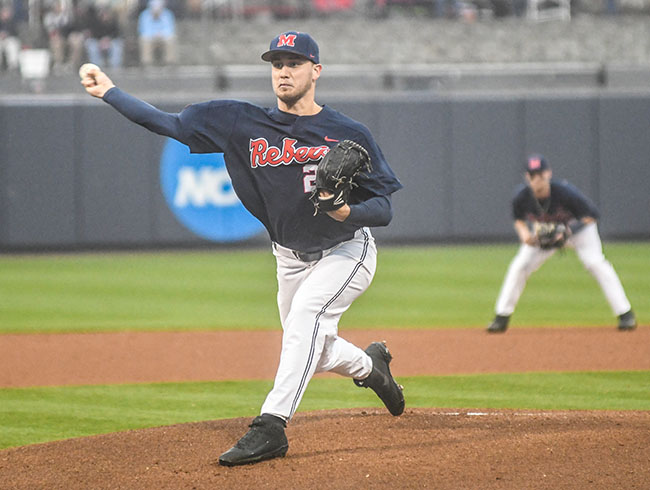 OXFORD – Amid a steady misting of rain and temperatures dipping into the forties, No. 10 Ole Miss shut out Wright State Friday night in their season opener, 10-1.

Tyler Keenan got the Rebels on the board early, with a first-inning solo shot homerun to left. Both of the first two runs for Ole Miss on the day were of the solo variety, with Cooper Johnson going yard deep to center in the second inning to put the Rebels up 2-0. Ole Miss would continue just stacking together runs, scoring at least one in every inning except the second and seventh.

“We have a lot of freedom at the plate to go out there and do what we want. They want us to be aggressive,” Johnson said. “That’s kind of got me in trouble at some points, but we’ve talked and we’ve worked hard on having an approach that’s good for me, specifically.”

Coming a triple shy of the cycle, Johnson was a bit of a surprise highlight for Ole Miss in the game. Batting eighth in the lineup, Johnson hit 3 for 4 with a home run, single and double and batted in two. Getting Cooper Johnson’s bat going is a good sign deep in the lineup. As a sophomore, he started 20 games but hit just .234. Ole Miss doesn’t exactly need another quality bat in the lineup, but if they can get Johnson to above average numbers that’s just scary.

“The ball that (Tyler) hit and the ball that Cooper hit, there’s not that many balls that get out of center field here period,” said head coach Mike Bianco. “Everybody always talks about (Johnson’s) defense, and it’s well deserved. But he’s worked so hard offensively and he’s had a really good fall and a really good early spring. He deserves to have one of those nights on opening day.”

Ole Miss starting pitcher Will Ethridge needed to shake off some rust early in this one. His final stats were incredibly clean line of 5.2 innings, 4 hits, 5 strikeouts and 0 earned runs. However, it took some time for Ethridge to settle into his game.

Ethridge needed 29 pitches to end the four-batter opening frame, one in which he would have his own fielding error on a dribbler towards the mound to allow the third batter to take first. He started the fourth inning by walking a batter then allowing a single, but was able to get out of that jam by flying a batter out and following it up with a double play ball.

“The 29-pitch inning was really a result of how good they are offensively and battling with two strikes. It was less of what he did,” Bianco said. “I thought he was really impressive. Really electric stuff.”

Ole Miss would pull Ethridge in the sixth after giving up two base runners for junior righthander Austin Miller. Miller would allow Wright State’s only run of the game, going 3.1 innings and allowing three hits in the process, striking out two.

Offensively, the Rebels got out and ran in this one early. Literally. They stole three bases in the game – two back-to-back by Anthony Servideo in the sixth. They scored twice on sacrifice flies and two more times with runners on third taking home during a dropped third strike and passed ball.

“As physical as we can be, some of the big guys can run,” Bianco said. “We can do those things and that’s one of the things that makes this offense good. It’s not just the homers.”

With the win, Ole Miss goes to 18-1 in season opening games under Mike Bianco. First-year Rebel Zack Phillips, a junior college transfer, will start in game two of the Wright State series tomorrow at noon.