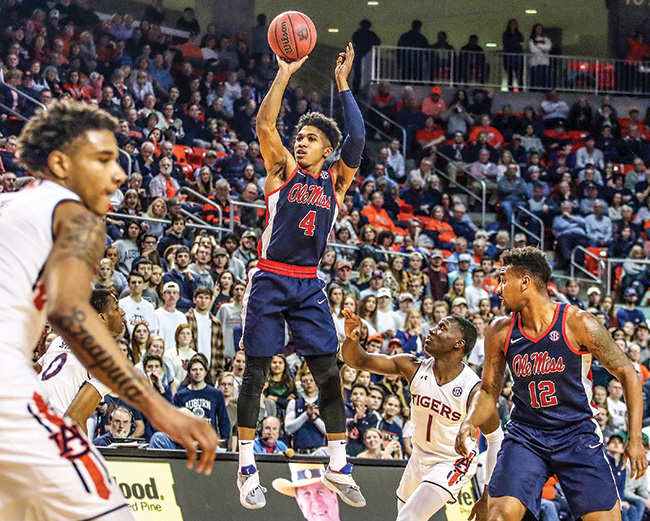 Kermit Davis’ game plan for Wednesday’s game in Auburn belongs in some sort of coaching museum. Auburn was second in scoring in the SEC entering Wednesday, averaging over 80 points a game. Ole Miss held Auburn to 55 in the win. After keeping the Tigers to just 67 their first game, Ole Miss has now held them to their two lowest outputs on the year.

A lynchpin in the defensive game plan was to run the Tigers off the three-point line. Auburn shoots more three pointers than anyone in the SEC and it’s not particularly close. They average 29.6 three-point attempts per game and make 11 of them. In Wednesday’s win, Ole Miss limited them to 20 attempts, and they made just five of them.

“It was an unbelievable effort by our players… we got unbelievable play from our bench,” head coach Kermit Davis said on SEC Network after the game. “They get so many of their threes in transition and off live ball turnovers. They play so fast and they’re so skilled at all positions. The biggest thing was try to limit fast break threes.”

Ole Miss is now 5-3 in true road games, 4-2 in the SEC. It’s something Davis has had his eye on since day one. Rebel practices emphasize the level of toughness that it takes to win road games, and it’s starting to show on the court. They’ve now won two straight road games in the SEC.

“We just talk about it all the time. Are we built to try to win in the toughest places in our league? I’ve said that from day one when I tried to get the job,” Davis said. “Our team has exemplified great toughness.”

Mizzou is one of the few SEC teams Ole Miss is yet to play. They’ll play Saturday and then again on Mar. 9. It’s one of the worst offensive teams in the league but also one of the best defensive teams. They average just 68.1 points per game, last in the SEC, but allow just 68.6 points.

Despite coming off of a one-point win at home over Arkansas, Missouri has lost five of their last seven basketball games. The same Auburn team that Ole Miss just beat on the road beat Mizzou 92-58.

Offensively, Missouri is one of the more balanced teams in the conference. Seven different players average five or more points and three average double digits. Senior guard Jordan Geist leads the team with just 13.8 points per game. He scored 18 in their recent win over Arkansas, but did so very inefficiently. Geist shot just 5 for 14 from the floor and attempted 12 three pointers.

For Ole Miss, the game Saturday represents a chance to win four in a row for just the second time on the year. After intentionally playing slow against Auburn, they’ll likely try to speed up a Mizzou team that wants to play slow. Saturday’s game will be at 2:30 p.m. at The Pavilion and is televised on SEC Network.

Ole Miss holds off Vanderbilt to its win third…