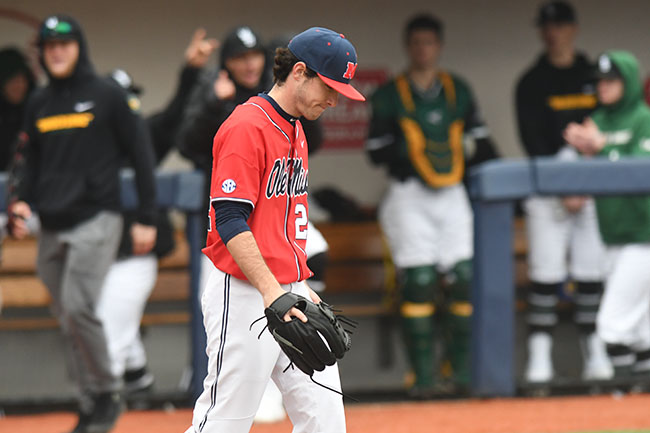 Ole Miss pitcher Zack Phillips walks back to the mound after giving up a run scoring double against Wright State at Oxford-University Stadium in Oxford, Miss. on Saturday, February 16, 2019. (Bruce Newman, Oxford Eagle via AP)

A day after amassing only one run on Friday, Wright State scored nine times that number against Ole Miss on Saturday afternoon.

Wright State tagged Rebels starter Zack Phillips for five earned runs, while combining for seven runs in the third and fourth innings, en route to a 9-5 win over Ole Miss.

The Rebels would stage a comeback, scoring their five runs during the second half of the contest, but Tyler Keenan would ground out with the bases loaded to end the game.

The Raiders’ bullpen held the lead while showing off its depth. They used three different bullpen pitchers Saturday, after also going to the bullpen three times on Friday.

Cooper Johnson continued his hot start to the season, scoring Ole Miss’ first run on a RBI single. Ryan Olenek would hit a home run and score Johnson, and Chase Cockrell added another run with an RBI single that scored Thomas Dillard.

Dillard would go yard in the eighth, cutting the Wright State lead to three.

Ole Miss’ offense, after scoring 10 runs on Friday, didn’t capitalize on its early scoring chances Saturday. In the first three innings, the Rebels stranded four runners, including an opportunity in the first inning when Ole Miss had runners on first and third.

Wright State opened the scoring as JD Orr scored after Zach Weatherford reached first on an error. Phillips missed tagging Weatherford at first, and the play was held up after a review.

Phillips exited the game after that, with a final line of 2.2 innings, six hits, four earned runs and two walks. Ole Miss would use three bullpen pitchers on the day: Trevor Broadway, Max Cioffi and Kaleb Hill.

Wright State added three in the fourth on a Gray single and a Slone double. Gray’s single scored two, and he finished the game 3-5 with four RBIs.

One of the lone bright spot for Ole Miss is easily Johnson, who tagged a Wright State runner out at home in the first inning on a pinpoint throw from Cockrell that was held up after a review. Johnson went 1-3 from the plate, but did gather a RBI and a run.

Another bright spot was the combination of Hill and Cioffi. The duo only gave up one run.