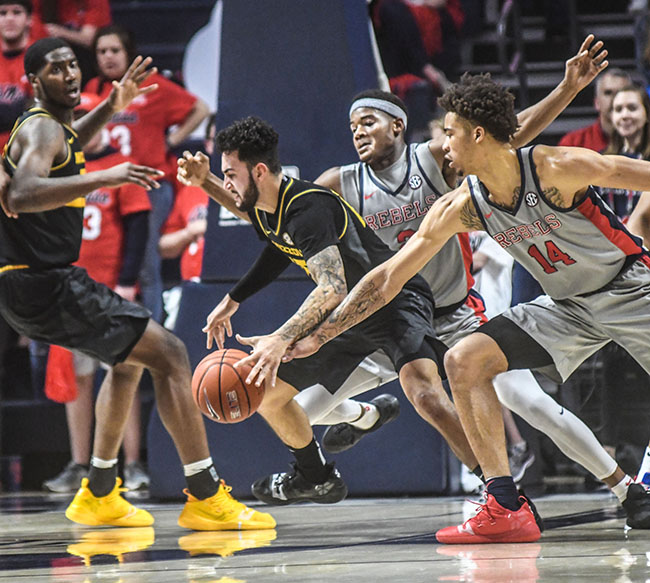 OXFORD – Kermit Davis’ Rebels continue finding ways to up the ante on the defensive end. Coming off a road win where they held Auburn to their season low, Ole Miss put together another great defensive outing, beating Missouri 75-65. Ole Miss has now won four in a row after a stretch where they lost five five of six.

Ole Miss’ pressure defense was very active from the start in this game. Mizzou had turned the ball over just 10.5 times per game in their prior four. Today, Ole Miss forced 15 turnovers in the first half and 25 in the game.

“I thought their guards did a great job putting pressure on the perimeter, making us doing the next thing. They made us uncomfortable, and that’s where the turnovers happened,” said Missouri head coach Cuonzo Martin. “I thought we did some good stuff, but 25 turnovers. It’s hard to win a ballgame like that.”

A handful of questionable shots on the offensive end by Terence Davis and Devontae Shuler kept Missouri hanging around in the first half. However, it was a game Ole Miss controlled from the start. Mizzou was able to pull the lead to four at 19-15 before the Rebels would pull away to close the half up nine.

While the second half was competitive, the outcome never seemed all that much in doubt. Mizzou held Ole Miss without a bucket for close to five minutes but couldn’t close the gap. The closest Mizzou was able to get the score was seven with 4:03 left to play. Ole Miss would put the game on ice with late free throws, winning 75-65.

Freshman forward K.J. Buffen was quietly very good in this outing. His stat sheet won’t jump out at you, 14 points, 4 rebounds and 4 assists, but he did a lot of small things very well for the Rebels. He even hit a three pointer, pushing him to 3 for 10 from downtown on the season. Being capable to pop an outside shot will open up a lot for his game and for team spacing.

“I thought (Buffen) naturally tried to rebound today. Even when he didn’t get it, he was the one guy that when we missed a shot, he was going,” Davis said. “He’s guarding better and he’s starting to shoot better and more comfortably.”

It wasn’t all rainbows and butterflies for the Rebels. Rebounding issues plagued the opening half of play for Ole Miss. Any time the Rebels started to pull away, they’d allow Mizzou an extra possession due to offensive rebounds. The Tigers grabbed nine offensive rebounds in the opening 11 minutes of play leading to 8 of their opening 15 points. They would outrebound Ole Miss 37-21 on the game.

Four Rebels scored in double figures and Terence Davis had 9, one of the more balanced offensive games on the year.

The Rebels have now put together three consecutive very good defensive games. They held Georgia to 64 on the road and Auburn to 55 on the road. Today they held Mizzou to 65.

With the win, Ole Miss moves to 18-7, picking up win number 8 in the SEC. They’ve also won 10 of the last 11 meetings against the Tigers.