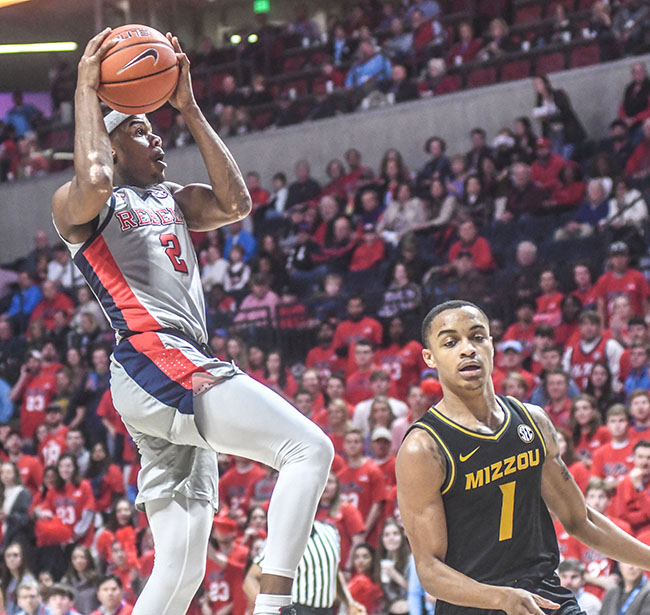 Tuesday night’s matchup against two 8-4 teams in the SEC may carry a little extra weight. Putting their four-game win streak on the line, Ole Miss travels to South Carolina Tuesday night for a game that could decide seeing particulars for the upcoming SEC tournament.

Despite a 13-12 overall record, South Carolina is tied with Ole Miss at 8-4 and fourth place in the Southeastern Conference standings. The three teams ahead of them, Kentucky, LSU and Tennessee, are all at least 10-2. The nine teams below them are no better than 6-6 in the conference. Tuesday night will be a critical tiebreaker for the fourth spot.

“It’s a big game. It really is. I think probably Frank and I both know we’re not going to win the SEC regular season championship. But there’s so much to play for,” said Ole Miss head coach Kermit Davis. “These double-byes, getting to the quarterfinals, it’s a big game there’s no doubt. Whoever wins that game will be one game up and have the tiebreaker.”

The top four seeds in the fourteen-team SEC tournament get a double-bye in the tournament. It’s a direct invitation to the quarterfinals of the tournament. Not only do you have to play one less game, it lowers the chance of losing to a team much worse than you. It also helps for rest issues. Playing three games in three days is tough. Playing four games in four days is worse.

With only six games remaining in the conference, the winner of Tuesday night’s contest in Columbia will be fast-tracked into that double-bye.

South Carolina has lost twelve games. That said, South Carolina has also played the league’s second-hardest schedule. In back-to-back December games, the Gamecocks took on Michigan on the road and Virginia at home. Both teams are now in the top-7. South Carolina lost both. They’ve also already played against now No. 4 Kentucky and No. 5 Tennessee. Also both losses.

Despite the tough schedule, South Carolina is now winning when it matters. They started SEC play on a four-game win streak and are yet to lose back-to-back games within the conference.

“Like a lot of good teams, they understand how to win close games in the end,” Davis said. “They can beat you from a lot of different areas. Right now, there’s no doubt they’re playing just like an NCAA tournament team. If that team gets to the tournament, they can win games too.”

South Carolina is one of the better shooting teams in the conference. They shoot an average number of threes compared to others in the conference, but they’re making an absurd amount currently. Over their past five games, of which they have won three, the Gamecocks are shooting a blistering 54.9-percent from downtown.

“All four of their losses are probably to top-10 teams. They’re shooting the ball from three as good as anyone in college basketball right now. Their percentages are outrageous,” Davis said. “When you combine that with the toughness that Frank (Martin’s) teams play with, that’s a great combination.”

Ole Miss will need to do a good job pressuring the perimeter and defending the three. It’s actually something Ole Miss has struggled with of late, despite winning four in a row. Over their four-game win streak, opponents are shooting just over 42-percent from downtown. The game against the Gamecocks will air on SEC Network at 6 p.m. Central.