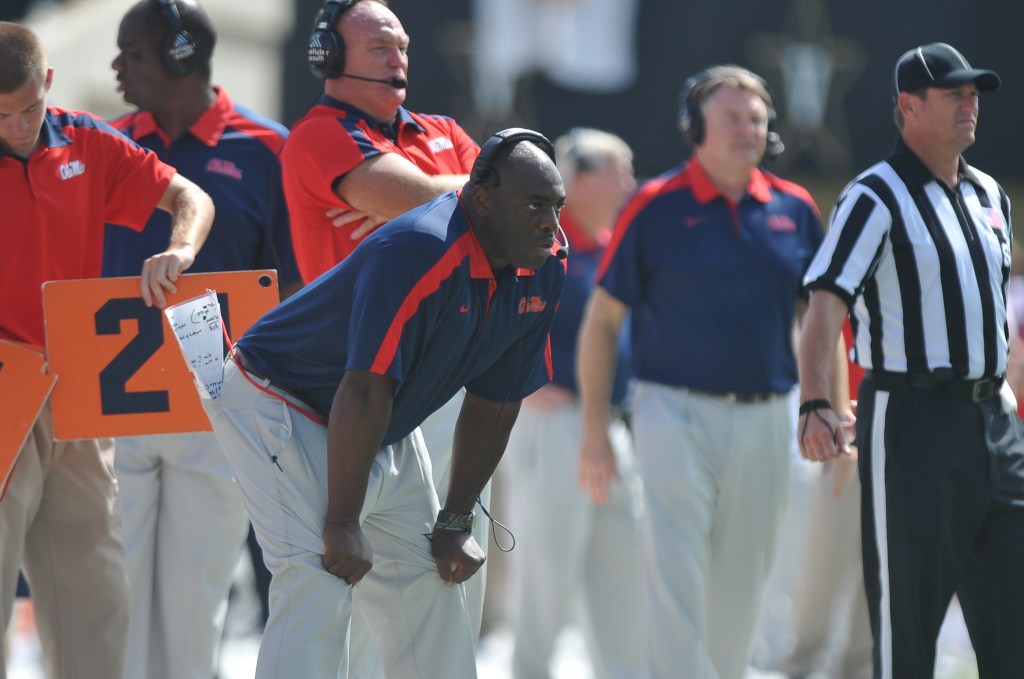 Tyrone Nix, who coached at Ole Miss as defensive coordinator from 2008-2011, is returning to coach outside linebackers. (Bruce Newman, Oxford Eagle)

Matt Luke has filled the vacancy in his defensive coaching staff, yet at a different spot than the one that was open. Ole Miss brought back Tyrone Nix to coach outside linebackers over the past weekend. Nix is returning home to Oxford where he was the defensive coordinator for four seasons from 2008-2011.

Former safeties coach Jason Jones was let go of earlier this month, leaving an opening on the assistant coaching staff. New defensive coordinator Mike MacIntyre’s background is in coaching defensive backs. Therefore, they decided to instead fill the safeties coach void with an outside linebackers coach in Nix. However, Nix has experience coaching the secondary as well.

Tyrone Nix comes to Oxford from Virginia Tech, where he spent last season coaching safeties. Last year at Virginia Tech, Nix’ safeties totaled 124 tackles, eight pass breakups and four interceptions. Prior to his stint at Virginia Tech, he had worked exclusively as a defensive coordinator or with front seven players.

“Our staff wishes Coach Nix and his family the very best as he returns to the state of Mississippi, a place where his family owns very deep ties,” read a statement by Virginia Tech head coach Justin Fuente. “I certainly understand his desire to return to a place he considers home, as well as the opportunity to once again coach with his brother at Ole Miss.”

Nix will join his brother on the coaching staff. Derrick Nix has been in Oxford since 2008 coaching running backs.

Tyrone Nix’s four years as a defensive coordinator at Ole Miss were up and down. Things started well – the Rebels ranked 20th and 21st in defense by FEI, a Football Outsiders defensive efficiency metric, during his first two seasons. However, they took a precipitous fall in the two years prior to his departure. The Rebel defense ranked 60th in 2010 and 103rd in 2011.