Survive and Advance: Oxford hangs on against Horn Lake to extend season 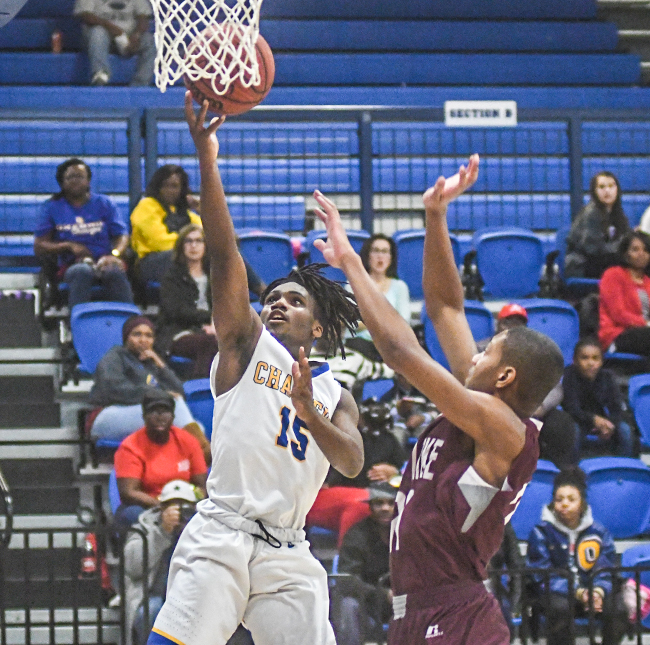 OXFORD – Oxford needed guts Tuesday night in the opening round of the Class 6A State Playoffs. Taking a sixteen-point lead to halftime, the Chargers nearly gave away a big lead late for the second time in two games. Unlike four days prior at Tupelo, Oxford was able to make their free throws down the stretch to win, beating Horn Lake 70-66.

“A lot of deja vu thoughts to be honest. It felt like we were really just trying to hold them off and survive. Horn Lake turned up the pressure and turned up the intensity,” said head coach Drew Tyler. “We have to stay the aggressor. We were in the double bonus. We weren’t trying to stall. Fortunately we made some free throws late and were able to hold them off.”

Oxford would start the first quarter slowly, the game tied at nine with just over 4 minutes to go in the opening quarter. The Chargers would score nine unanswered to end the quarter up 18-9, capped by a Tykel Owens offensive rebound and layup at the buzzer.

Where the first quarter ended the second would begin likewise. Oxford scored the first ten points of the quarter, capping a 19-0 run. Horn Lake played more competitively the last four minutes of the half, but would enter the intermission trailing 38-22.

Remember that little thing called runs? Well they defined this game. Following the 19-0 run that spanned the first and second quarters, Oxford would start the second half on a 9-0 run. They would then commit turnovers on three consecutive possessions to allow the Eagles to score eight straight of their own.

Back-to-back Oxford turnovers followed by made Eagle threes almost tied the game up early in the fourth. Horn Lake was able to trim the Oxford lead to as little as three with five minutes to go in the game, before Oxford went on a 6-0 run of their own. A few missed free throws late and an Eagle three-pointer again cut the lead to three, at 67-64, with 26.2 seconds to play. Oxford’s Byron Pearson would subsequently ice the game with two free throws, Chargers winning 70-66.

“We lost a lot of mental toughness to graduation last year. Preseason, that’s one of the things I highlighted to the guys, being mentally tough late in games and late in the season,” Tyler said. “We talked about that tonight pregame and at halftime. We knew they were going to make a run, but we stepped up late in the game.”

In a game that looked to be eerily familiar to their Region 2 Tournament final to Tupelo, Oxford was able to pull it out this time. Free throw issues plagued Oxford down the stretch in the Region 2 Tournament final against Tupelo. The Chargers would miss 14 free throws in the game, allowing them to squander away a double-digit fourth quarter lead and lose the game and the tournament.

Tuesday night’s game was a bit better from the line, but still far from good. Oxford went 18 for 28 from the line in this one, a 14-percent increase on the game prior.

“Some of these games could’ve been put out of question early just by shooting a higher percentage from the line,” Tyler said. “For us it comes down to being really strategic about who gets the ball in certain spots on the court late in the game.”

An interesting subplot in the game was that of Oxford guard Cade McKeller. McKeller was likely to start for the year, and did so for the team’s first game, before breaking his fibula. He checked in for the first time since November during the third quarter. McKeller played just a few minutes and was scoreless, but it was nice to see him out there healthy.

With the win, the Chargers will travel to Clinton for the second round of the playoffs on Saturday to face the 20-9 Arrows.