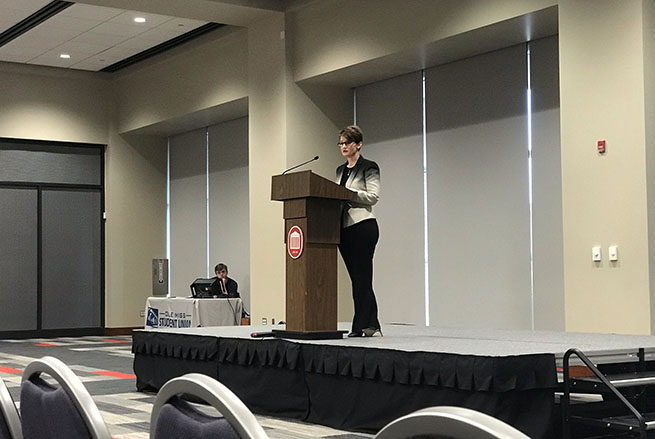 Vice chancellor for student affairs Brandi Hephner LaBanc speaks during the Community Conversation that was held in the ballroom of the student union on Ole Miss' campus on Wednesday. University officials spoke with students, faculty and residents of Oxford about the rallies taking place this weekend regarding confederate symbolism. (Jake Thompson/Oxford Eagle)

With growing concern over events taking place in Oxford and at Ole Miss this weekend, university officials met with students, faculty and residents of the community to discuss issues they had regarding those events.

For nearly 80 minutes questions were asked and answered inside the ballroom at the student union at Ole Miss’ campus surrounding the rallies and marches scheduled to take place this weekend over confederate symbolism.

On Saturday afternoon a Mississippi Stands rally and march is scheduled to take place. The event is put together by groups called Confederate 901 and The Highwaymen, who will march from the Oxford Square to Ole Miss where they will then hold a rally located at The Circle where a confederate monument resides.

The march is scheduled to begin at 1 p.m. with the groups arriving on campus at 2:30 p.m. and staying there for around an hour before marching back to the Square to conclude their protest.

Several issues were brought up during Wednesday’s discussion ranging from safety on campus during the event to Mississippi gun laws and the future of the monument that is at the center of this weekend’s event.

Word of the Mississippi Stands rally began to spread when a photo of a flyer about the march started circulating around social media a couple weeks ago. It was a student who brought it to the attention of LaBanc, who then began working on a plan with university staff.

“I feel the feedback I’m getting is that folks were appreciative that we have the time and the space (to hold the meeting),” LaBanc said after the discussion concluded. “We made that intentional choice to open up and spend more time with Q&A. I think folks are feeling better. Information always helps people kind of navigate these situations better.”

During her opening comments LaBanc re-enforced the sentiment of the letter chief Hawkins sent out to campus faculty, staff and students about avoiding the areas on campus where Saturday’s events will take place.

“We do have concerns about the groups that they may draw,” LaBanc said. “So, we don’t know who will be drawn in by these groups, especially outsiders to our community, to our family. That’s why we encourage folks to stay away and not engage.”

Several questions, which were ask mostly by students who were in attendance, pertained to campus-wide safety throughout the event and not solely at the event’s location. A couple people noted not everybody has the ability to avoid campus, or leave it altogether, due to other factors.

To those questions, chief Hawkins assured everyone that there would be a more-than normal police presence throughout campus for the duration of Saturday’s events.

“We’re going to be set up a lot of places,” Hawkins said.

As it pertains to the Mississippi Stands rally, officers with the Oxford Police Department will escort the groups down University Avenue to Ole Miss. Once they reach the line of demarcation between Oxford and the campus, UPD officers will take over escorting duties and stay with the group until they escort them off campus and back to city limits.

Saturday’s rally is not the only event scheduled this weekend. On Friday a group called Students Against Social Injustice (SASI) will hold a rally titled ‘Students over Statues’ which will also take place in front of Lamar Hall at 3 p.m. University professors and other guests will speak.

Several members of SASI were in attendence during Wednesday’s discussion, including Taia McAfee, who asked questions about Saturday.

“We’re just working towards racial reconciliation,” McAfee said. “There were a lot more professors here that were actually standing up and they were creating this dialogue. We’re not just asking ‘can you take the statue down?’ anymore. We’re asking ‘you need to talk to this person at this time,’ getting more specifics. I do think we’re making progress.”

McAfee noted their event had already been scheduled for Friday before the Mississippi Stands event was announced.

During the Mississippi Stands rally there will be a counter rally being held at Ole Miss’ Jackson Avenue Center during the same time. The group putting on the ‘Anti-Confederate Counter Rally’ worked with UPD and other officials to find a safe place to hold their protest and the JAC was an agreed upon location.

Saturday is also a visit day for Ole Miss. There will be around 200 prospective students and their families on campus that morning taking tours. Those tours usually run from 8 a.m. to 3 p.m. but the admissions department worked to tailor this Saturday’s so it will end around 1 p.m. to get those people off campus before the groups arrive.

Ole Miss is hosting Georgia for a men’s basketball game at the Pavilion at 2:30 p.m., which is still scheduled to be played. University Avenue and The Circle will be closed off to traffic during the time of the march. Ole Miss athletics moved the town hall event with vice chancellor of intercollegiate athletics Ross Bjork, which is scheduled to begin at 12:30 p.m., from The Inn at Ole Miss to the Ole Miss football team meeting room. It is not known if it was moved due to the march or other factors.