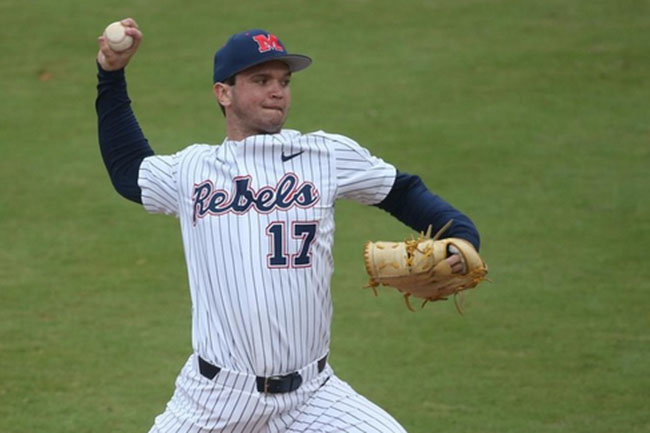 OXFORD – Ole Miss was simply better at playing baseball than was Arkansas State on Wednesday night. Squeezing in nine-innings of baseball amid a week laden with rain showers, the Rebels beat Arkansas State 15-3.

“Tonight, we needed some offense. After Saturday, where we fell behind and couldn’t really make a dent in it until it was too late, it was nice to bounce back,” said Rebel skipper Mike Bianco.

After getting his scheduled debut start rained out on Sunday, Bianco decided to get true freshman Gunnar Hoglund some work in this one. His first start donning an Ole Miss uniform was… shaky?

Hoglund opened the game by failing to put away even one of his first four batters face. The first Red Wolves batter to face Hoglund doubled. Hoglund hit the second. The third and fourth batter both recorded RBI singles. He crawled back to strike out the next three but Arkansas State got off to a quick 2-0 lead.

“I was just trying to get in a rhythm from the beginning and get my feet wet,” Hoglund said. “I was a little anxious to start the game. The first couple batters, I kind of let the nerves get to me. But I settled in after that.”

Ole Miss got the bats going early in this one. Ole Miss needed just three batters to dig themselves out of Hoglund’s hole. Grae Kessinger and Anthony Servideo led off the bottom of the first with a pair of singles. Tyler Keenan took the next at bat deep to the right field bullpen. Ole Miss would record six hits and score five in the inning.

Getting Kessinger and Servideo going has to feel good for the Rebel squad. Both hitless coming into the game, Kessinger went 3 for 3 and had a walk, while Servideo went 2 for 4 with two RBIs.

The hot bat of Thomas Dillard continued in this one. Dillard came into the night batting a blistering .833. He went 2 for 4 with 3 RBIs a triple and a homer tonight. On the year, he’s now batting .700 with two home runs and five RBIs. His three-run homer in the fifth inning traveled an estimated 410 feet.

Ole Miss’ offense would record 19 hits on the game, their most since May 2016 against Kentucky. After recording five runs in the first, they would add five more in the fourth and four in the fifth. They would score 15 total on the night.

“(Offensively), I think we’re doing how people thought we would. There’s just some simple things we could do better,” Dillard said. “We’re always going to be able to hit the bar pretty far, but we need to go out there and execute the little things.”

Despite the lopsided final score, the win raised even more questions in the Ole Miss rotation. Zack Phillips was far from good in his first start on Saturday, giving up four earned runs in 2.2 innings. Hoglund was better, but certainly not good in his own right. He allowed four hits and two earned in this one. While Roth was good in his limited action tonight, there’s a reason he wasn’t starting over the weekend – Phillips and Hoglund simply beat him out.

“Every time you go out there your the first time, there’s going to be some nerves,” said catcher Thomas Dillard. “I though (Hoglund’s) stuff looked really good after (the first few batters). For him to fill it up, he showed a lot of maturity.”

Ole Miss will travel to New Orleans this weekend for a three-game series against Tulane. Will Ethridge will not pitch on the Weekend, dealing with a blister in his throwing hand. Zack Phillips will move up a day and pitch Friday night to get things going for the now 2-1 Rebels.