No. 6 Mississippi State dominates in the post to drub Ole Miss at home 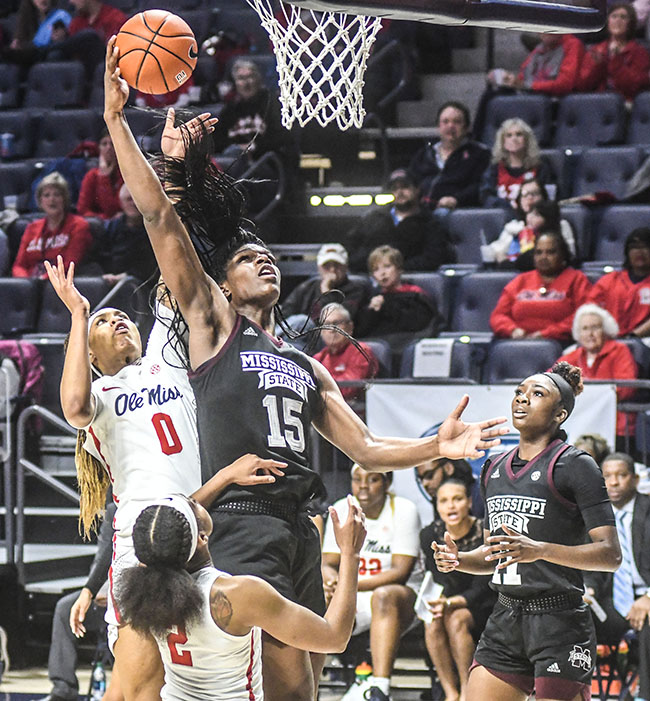 A clever game plan, which included forward La’Karis Salter playing point guard at times, kept Ole Miss in striking distance of No. 6 Mississippi State through one half.

Game planning aside, the Bulldogs are No. 6 in the nation for a reason, and exploited the Rebels for 44 points in the paint as they dominated Ole Miss 80-66 at the Pavilion Thursday.

Crystal Allen and Mimi Reid lead Ole Miss in scoring with 29 and 11, respectively, as the team would only trail by eight going into halftime. This was due, in large part, to coach Yolette McPhee-McCuin’s plan to play Salter in the backcourt.

Ole Miss would play stuff the post defensively, and force MSU to shoot outside shots. The Bulldogs shot 0-6 from 3-point range in the first half, and finished shooting 3-13 from beyond the arc. Reid scored 11 in the first half for Ole Miss, as the Rebels trailed 37-29 going into halftime.

McPhee-McCuin said she switched the team’s defense from zone to man-to-man for the exact reason that MSU does not shoot very well from outside the paint.

“Everybody knows it, they don’t have good perimeter shooters,” McPhee-McCuin said. “We wanted to pack the paint.”

Then, Ole Miss’ recent third quarter struggles wasted no time rearing their ugly heads. Those struggles wouldn’t stick around long, but it was all Mississippi State needed to establish their big lead.

Within the first 90 seconds of the third quarter, Ole Miss missed their first three shots and allowed the Bulldogs to go on a 6-0 run. Ole Miss wouldn’t go away, but it just couldn’t match Mississippi State. The Bulldogs would hit their first 3-pointer with about two minutes left in the third and extend their lead to 20 at the end of the third.

The fourth was much of the same, as Ole Miss and Mississippi State traded baskets. The Rebels would cut the Bulldogs’ lead to within 14, but could never come any closer.

Despite the double-digit loss, Ole Miss’ loss Thursday was still better than its 31-point loss in January.

“For us to come out here and continue to compete and not give up, that’s big for us,” Allen said.