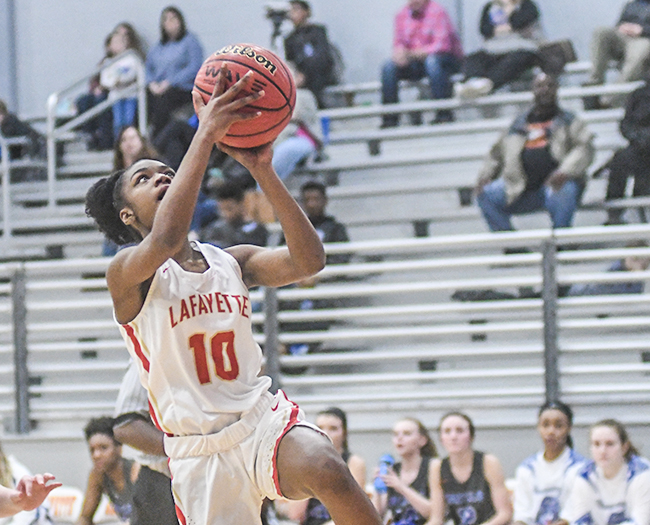 For the first time in a week, the Lafayette girls will take the court Friday night in the second round of the Class 5A State Playoffs. Coming off a regional tournament championship win last Friday over West Point, it’s the first home game for the Lady Commodores in over two weeks.

Entering the game riding a five-game win streak, Lafayette hasn’t lost all month – they no longer can afford a single one. The do-or-die playoffs start this Friday against Vicksburg. Having the first-round playoff bye helps, but it always presents the chance for a little rust to show itself early.

“To be honest, I think the bye is really important,” Linzy said after the regional final victory. “You weigh the positives with not playing for a week, but we’ll have tough practices and the rest is always a good thing.”

Vicksburg limped into the playoffs, losers of six of their final seven games. However, they appear to be winning when it matters. At 18-12 on the year, they’re coming off a 58-45 victory over Canton in the first round of the playoffs.

Oxford boys travel to Clinton for second round

Horn Lake put a scare into Oxford in the opening round of the playoffs Tuesday evening. Oxford blew a sixteen-point halftime lead as Horn Lake cut the Charger lead to three points at two separate occasions during the fourth quarter. Oxford hung on to win 70-66 in a game that certainly tested their mental toughness.

“We lost a lot of mental toughness to graduation last year. Preseason, that’s one of the things I highlighted to the guys, being mentally tough late in games and late in the season,” said head coach Drew Tyler after the win. “We talked about that tonight pregame and at halftime. We knew they were going to make a run, but we stepped up late in the game.”

Saturday, the boys travel to Clinton to play the 20-9 Arrows in their Class 6A playoff second round game. After starting off the year a little shaky, Clinton won nine of their last ten games entering the playoffs, including two double digit wins in their district tournament to clinch the first-round playoff bye.

Oxford is going to need to shore up issues from the free throw line if they have any hopes to extend their season. Against Horn Lake in the opening round, the Chargers hit on 18 of 28 free throws, good for a decent 64-perecent. However, in their previous game against Tupelo, the team made just 12 of 24 free throws, allowing them to squander a double-digit fourth quarter lead.

The Lafayette girls are scheduled for 7 p.m. on Friday with the Oxford boys playing at Clinton on 7 p.m. Saturday.