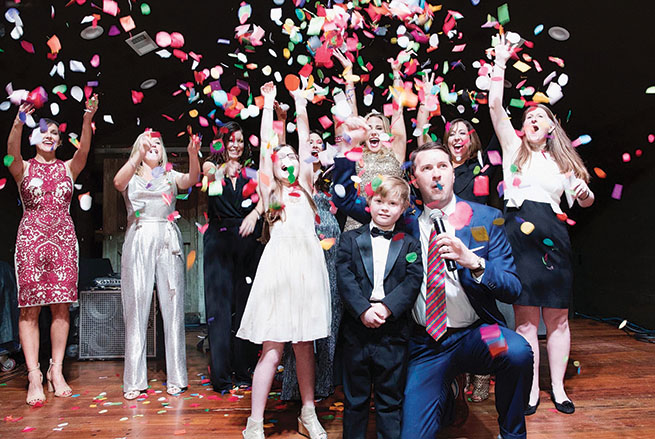 One of Oxford’s most successful charity events takes place tonight and recent was recognized for its efforts.

The St. Jude Taste of Oxford is back for its 12th year but this time will boast being honored by St. Jude Children’s Research Hospital for the event’s creative integration of the hospital’s mission with the Best St. Jude Mission Experience Award. The award was given for Taste of Oxford’s 2018 event titled ‘No Mo Chemo’, which was a party honoring Oxford resident and St. Jude patient James Rayner. Rayner spent three years at St. Jude in active treatment for his cancer.

“We blew confetti cannons and toasted James, this incredible kid who we all love, who was wearing a tuxedo with tails. He absolutely captured the crowd and created a magical moment,” said Elizabeth Randall. “We will take the stage again this year with another Oxford child who is a St. Jude patient… St. Jude is currently and actively supporting Oxford families with very sick children, and our community is reciprocating that support in a huge way.”

Randall is the event chair for Taste of Oxford.

This year’s event will once again be held at the Jefferson tonight 7 p.m. There will be a silent and live auction featuring items from several local businesses and the Spazmatics will be on hand to provide musical entertainment. Oxford’s own Richard Cross will serve as emcee and Peter Costa will be the special guest. Costa is a former Governor of the New York Stock Exchange and a market analyst on CNBC. Guests will be served culinary specialties prepared by chefs from the greater Oxford area.

In its first 11 years Taste of Oxford has raised nearly $2 million, which goes directly to covering the needs of patients and ensuring their families never receive a bill for services at the hospital. Last year’s event had more than 1,200 guests, placing Taste of Oxford among the top 25 fundraisers across the country for dinners and galas.

Some of this year’s auction items include a party at Proud Larry’s with Jimbo Mathis or a private Sunday night party at Proud Larry’s, A Friday Night Lights package where the winner and 74 other people will have a dinner the night before an Ole Miss football game next season catered by Elizabeth Heiskell and Deloris Franklin with music by The Pryor Band. There is also a prize of having a dinner for the winner and 39 other people called ’40 on the 50’ where they will have dinner on the 50-yard line at Vaught-Hemingway Stadium on Friday, Oct. 18. That will be the night before Ole Miss hosts Texas A&M.

“Our small community has an unbelievably big heart,” Randall said. “Each year, individuals and businesses continue to say yes and step up to the challenge and participate in so many ways – from sponsorships, to donating items for the live and silent auction, to their time, to providing food, to buying tickets, and so much more. They are doing it because this community has a true belief in the phenomenal mission of St. Jude.”

For more information or to purchase tickets visit the Taste of Oxford website or call Lee Bobo at 901-626-9025.