Every game matters for Ole Miss, even bottom-feeder Georgia 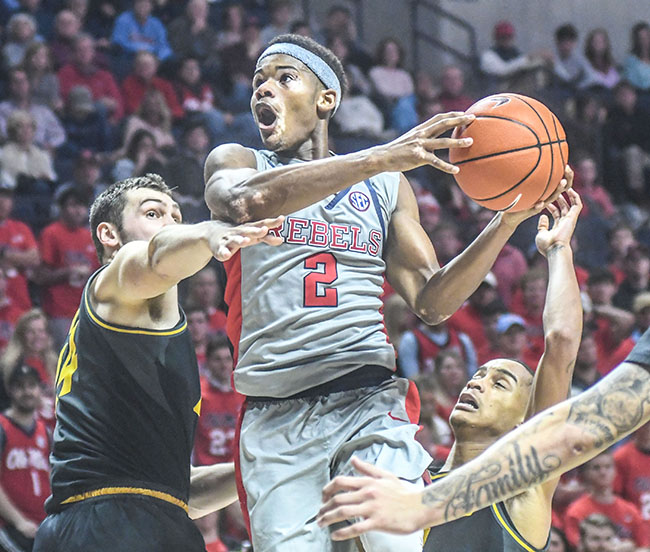 Mississippi guard Devontae Shuler (2) is fouled as he goes up between Missouri's Reed Nikko (14) and Xavier Pinson (1) at the Pavilion at Ole Miss, in Oxford, Miss. on Saturday, February 16, 2019. Mississippi won 75-65. (Bruce Newman, Oxford Eagle via AP)

Kermit Davis’ first year at the helm of Ole Miss basketball has been an unquestioned success. However, there’s no doubt it’s been a little streaky. Not all streaks are bad, but some of them have been. When Georgia comes to town Saturday, Davis’ Rebels need to avoid letting the losses compound as they have done in the past.

Ole Miss rode a 10-game winning streak from December through the first three games of SEC play. They then lost five of six games. Once the Rebels got things turned around they won four straight conference games, pushing them to fourth in the SEC.

The four-game streak ended in a pivotal game for conference standings on Tuesday at South Carolina. The Gamecocks jumped on Ole Miss early en route to a 79-64 win, hitting nine threes and gathering 16 offensive rebounds in the process. Ole Miss was able to pull it together late in the second half, tying the game at 61 before South Carolina went on a 18-3 run to end the game.

One loss really isn’t the end of the world for the Rebels. Sitting at 8-5 in the SEC now, Ole Miss is still in good standing as far as the NCAA tournament selection committee is concerned. If they let this one loss spiral them as they did during their last losing streak, it could be rough end of the year.

Thankfully, Ole Miss gets a good rebound game on Saturday, a home meeting with one of the SEC bottom feeders, 1-12 in the conference Georgia.

Having already gotten a look at Tom Creen’s upstart Georgia unit earlier this month, winning by 16 on the road, it’s a game Ole Miss both should win and needs to. Despite the eight losses thus far, Ole Miss is yet to have a “bad” loss as far as their NCAA tournament resume is concerned. Losing to 10-16 Georgia at home would certainly count as bad.

Record aside, Georgia is not all that much of a pushover. They’ve been right there until the end of their last two games against likely tournament teams in No. 19 LSU and Mississippi State. The Bulldogs lost to LSU by 4 points last weekend and Mississippi State by just one point on Wednesday.

Georgia has been at its best when playing more balanced offensively. In both of the past two games, they’ve had five players scoring nine or more, with no individual topping 13 points.

The point stands that outside of their losing record, this Georgia team has played good basketball the past seven days. Ole Miss needs to make sure to not look past the Bulldogs on Saturday.