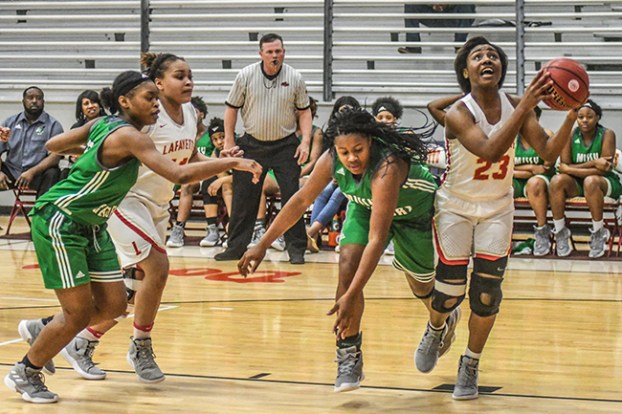 The Lafayette Commodores held on to advance to the third round of the MHSAA Class 5A State Playoffs Friday night with a 71-66 victory over the Vicksburg.
Lafayette (24-6) led by as many as 18 in the game, but lost control in down the stretch the third quarter. They led by as much as 18 with 3:22 to go in the 3rd quarter.
“We had a couple of girls in foul trouble and a couple of girls get tired,” Lafayette head coach Shayne Linzy said. “We put our young girls in because they need the work. They had some really good moments, but at the end of the third they really struggled. That’s just part of it and I’m proud of the fact that we were able to fight back.”
Senior guard Mariah Holland led the Lady Dores with 22 points on the night. Junior guard Azariah Buford was right behind her with 20 points. Lafayette jumped on the Gators early with runs in the first and second quarters. Lafayette opened on a 8-0 run in the first, and followed suit with a 6-0 run in the second. The Commodores rode the hot start to a 30-17 halftime lead.
“That’s something we talked about before the game started,” Linzy said. “We talked about getting after them early and knocking them down. We got on them in the first quarter, and I felt like we stayed on it. In the second, we got on them again and I don’t know what it was it could’ve been substitutions or foul trouble.”
Turnovers were the story of the game. Lafayette protected the ball well in the first half. However, Vicksburg (18-13) turned up their pressure in the lady half and the Lady Dores struggled. Lafayette ended the third quarter with three consecutive turnovers that cut the lead to six heading to the fourth. They would hold on to beat Vicksburg by four.
“We got off to another one of those hot starts in the third to extend the lead to almost twenty,” Linzy said. “We made some substitutions based on fouls, and some people got tired. That group got tired and I left them in there to try and finish Vicksburg off. I should have made the substitutions like I normally do to space out who’s out there and who’s not. I’ll take the blame for an exciting finish.”
With the win, Lafayette will host Olive Branch in the third round of the playoffs on Monday. According to Linzy, the focus is on putting together a full game minutes of basketball.
“We’ve got to focus on playing a full 32 minutes,” Linzy said. “We’re a good two and a half to three quarter team, and we’re going to have to do better at some point. If we don’t put four quarters together, then we’re going to be in trouble. We as coaches and players have to figure out what we need to do to get it done.”
** story via stringer Walker Bailey

Every game matters for Ole Miss, even bottom-feeder Georgia

Kermit Davis’ first year at the helm of Ole Miss basketball has been an unquestioned success. However, there’s no doubt... read more