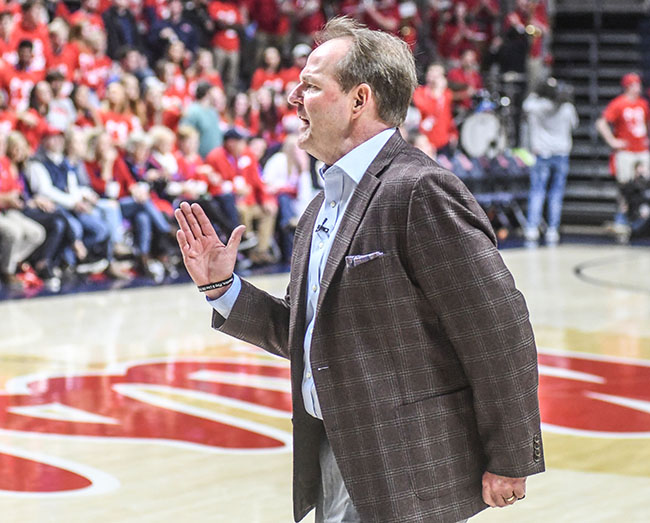 Mississippi head coach Kermit Davis talks with a referee during a timeout against Georgia at the Pavilion at Ole Miss in Oxford, Miss. on Saturday, February 23, 2019. Mississippi won 72-71. (Bruce Newman, Oxford Eagle via AP)

OXFORD – Focusing on basketball was admittingly difficult today. Ole Miss beat a lowly Georgia team 72-71 at home on Saturday. However, the real news happened before the game – six Rebel players knelt during the national anthem in protest of the pro-confederate rallies taking place in Oxford.

Both head coach Kermit Davis and junior guard Breein Tyree said that the decision for players to kneel was an in-the-moment thing. Davis was  unaware that they were going to do so. One unknown player started the kneeling and was quickly joined by five more. In total, eight players were kneeling by the end.

“It was all about the hate groups that came to our community to try to spread racism and bigotry. It’s created a lot of tension for our campus,” Davis said. “Our players made an emotional decision to show these people they’re not welcome on our campus. We respect our players’ freedom and ability to choose that.”

Handful of #OleMiss hoops player kneeling during the anthem with the rallies going on in Oxford today. pic.twitter.com/FzRFiLBYeP

Ole Miss doesn’t anticipate the protest to extend to multiple games. They were protesting the pro-confederate rallies taking place on campus during the game by two non-Oxford groups Confederate-901 and Hiwaymen. Protestors started at the Confederate statue on the Oxford square and marched to the University of Mississippi campus, about a mile away.

From a basketball perspective, Ole Miss seemed to control play to start the game but were unable to pull away before a 22-9 run over the course of 9:46 of game time allowed them to build a ten-point lead going into half.

Georgia looked like a completely different team to open the second half. Holding Ole Miss to two points over the opening 4:24 of the second half, Georgia took the lead 43-41 with 15:36 to play in the game.

Trailing by three with ten minutes to play, a Terence Davis jump shot sparked a 13-2 run over the next five minutes of play to give Ole Miss their first commanding lead of the half. A pair of free throws would allow Georgia to tie the game at 69 with 1:24 to play before Devontae Shuler drilled a three pointer gave the Rebels the lead.

Georgia had a chance for a go-ahead shot with 15 seconds to play, but missed the open jumper. Georgia had another look at the buzzer to win after Tyree missed the front end of a one-and-one free throw, but missed. Ole Miss would hang on to win 72-71.

With the win, Ole Miss improves to 19-9 and 9-5 in the SEC. They play next on Wednesday, a home game against No. 5 Tennessee.